The presentation centered around 371 women who had digital mammograms done and also chest CT scans within one year of each other. From the mammograms the researchers could calculate a score indicating the degree of calcification of the breast vessels. The degree was classified as mild, moderate or severe. The same risk classification was done for coronary artery calcification based on the chest CT scans. There was a very close relationship between calcification of breast arteries and calcification of coronary arteries. The practical application of this is that when a woman is found to have significant calcifications of her breast arteries on a digital mammogram, she should be carefully checked with regard to her cardiac risks. The radiologist should report on these calcifications and the primary care giver needs to follow up with a referral to a cardiologist.

The Portuguese investigators found that calcification of breast blood vessels was an independent risk factor for heart disease. 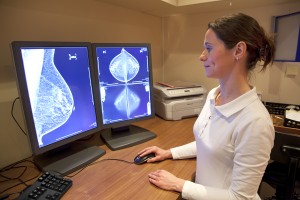 Digital mammography is a mammography tests that is frequently used to screen women for breast cancer. The radiologist can easily use the calcification information to assess the risk score for possible heart disease. This should be reported on the final report regarding the digital mammography. It will assist the treating physician to refer the patient to a cardiologist for further testing of the cardiac status.

More info on hardening of the arteries (arteriosclerosis): https://nethealthbook.com/cardiovascular-disease/heart-disease/atherosclerosis-the-missing-link-between-strokes-and-heart-attacks/