New research shows that there is an alarming rise in cancer among young people.

Here is a summary of the findings. Briefly, the article states that patients in the 20, 30 and younger than 50-year age group are more and more diagnosed with advanced stage cancers. Colon cancer tops this, but other cancers like breast, endometrium, gall bladder and bile duct cancer occur much earlier. Doctors also diagnose kidney cancer, pancreas, thyroid, stomach and multiple myeloma much earlier in younger patients. One recent example is Broadway actor Quentin Oliver Lee who died at age 34 at the end of 2022. Dr. Shuji Ogino is a professor of pathology at the Harvard T.H. Chan School of Public Health. He reviewed the incidence of colon cancer in different countries around the world. He found that the average yearly climb in colorectal cancer in young adults was 2% in these countries: US, Australia, Canada, France and Japan.

But the average yearly climb is 3% in England, Scotland and Wales. In Korea and Ecuador this climb is 5%. Dr. Ogino said;” “It doesn’t seem big, but you can think about inflation: If it’s 2% every year, it’s going to be a big change in 10 years or 20 years, you know? It’s not trivial.” Doctors diagnose about 10% of all colorectal cancers in people aged between 20 and 50.

Causation of cancer among young people

The authors of the study stated that some cancers can be detected now with more sensitive tests. But the majority of early cancers are due to poor lifestyles. Obesity is a big factor. In comparison to 20 year ago more people are obese today. The chronic inflammatory kinins that circulate in the blood of obese people can cause cancer. Inactivity, diabetes, consumption of alcohol, smoking and pollution are other cancer-causing factors. A Western diet with lots of red meat and refined sugar are additional factors that can lead to cancer, particularly colorectal cancer. Dr. Ogino mentioned that hormone disturbances from night shift work and lack of sleep also contribute to cancer. Many of the cancers found in young people are located in the digestive system. This points to the importance of a healthy diet and a well-balanced bowel flora, the microbiome, to prevent cancer.

The key to successful cancer treatment is early diagnosis. This is true for cancer in general, but also in younger people. The doctor wants to detect cancer at any age when it is localized without any metastases. This way cancer treatment is most successful with cure rates over 10 years in the 95% to 100% range. Cancer screening is particularly important. Recently a new very sensitive blood test was developed in the US, which can screen for most of the common cancer types. Presently it is only available in the US and the cost is rather high. It has the name “FoundationOne CDx”.  This test can diagnose cancer years before any of the other routine tests can pick up cancer. 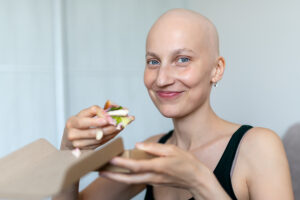 There is an alarming rise in cancer among young people. This is particularly the case with regard to colorectal cancer. Often patients younger than 50 are found to have advanced cancers, because the doctors did not expect them to have cancer at such a young age. Doctors must screen earlier for cancer to catch it at an early stage where treatment often is successful. In the US a company has developed a genetic cancer test with the name FoundationOne CDx. This allows with one blood test to diagnose a multitude of different cancers at an extremely early stage. Unfortunately, this test is very expensive, but it is highly specific and very sensitive.