Researchers from the University of Washington School of Public Health in Seattle, and colleagues have looked at data from 6,654 middle-aged and older adults taking part in the Multi-Ethnic Study of Atherosclerosis. The study population consisted of white, black, Hispanic, and Chinese men and women aged 45 to 84 years.

The first publications was in the medical journal Arteriosclerosis, Thrombosis and Vascular Biology.

First of all, researchers observed exposure to air pollution consisting mainly of car exhaust based on the residence of each person. In addition blood tests gave more insight and information, particularly HDL cholesterol levels. Researchers used the standard technique and also observed the HDL particle number. HDL is important to protect us from narrowing of our arteries, as it removes the bad cholesterol (the LDL).

Consequently Griffith Bell, PhD summed up their findings this way: ”Our study helps strengthen the biological plausibility of the link between traffic-related air pollution and cardiovascular disease. We’re slowly beginning to understand some of the biology of how that link works.” 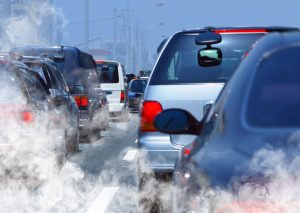 This study examined the relationship between exposure to pollution (and in particular to traffic exhaust) and HDL levels. The research team found already after only 3 months that there was a measurable effect of lowered HDL particles. It became obvious that after 1 year those with high exposure to car fumes had significantly lowered HDL levels. This explains why people with a higher exposure to car exhaust are at greater risk. They have a greater risk of developing a heart attack or stroke years down the road. HDL particles protect us from hardening of the arteries and we need these beneficial higher levels of HDL during all of our lives. They are one weapon of the body to avert heart attacks and strokes.