Prostatic hypertrophy means that the prostate gland is enlarged. Other names for this condition are benign prostatic hypertrophy or BPH; another name is “benign prostatic hyperplasia”.  We know from autopsy studies that an enlarged prostate is a common occurrence in males, particularly as they age. The reason for this is that a bladder outlet obstruction from a benign enlargement of the prostate slows down the urinary flow and this is age-related as is shown below.

Prostate enlargement as a function of age

Not ever man with an enlarged prostate needs to be treated, only those men who develop symptoms of urinary obstruction. Once the urine flow slows down to less than 600 ml per minute, there are critical situations when a few beer are consumed (leading to a significant increase in urinary volume), or with medications that have subtle anticholinergic side-effects. 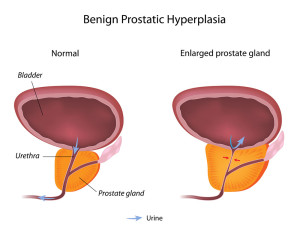 The involuntary bladder functions, which ensure the automatic relaxation of the bladder wall and the transmission of signals indicating to you an urge to go to the bathroom, are controlled by the powerful parasympathetic nerve. The biochemical transmitter in this part of the autonomic nervous system is acetyl choline, that’s why its transmission mode is called “cholinergic” and anything that would inhibit it is called”anticholinergic”. There are a great number of very diverse medications that have anticholinergic side-effects. This means that they inhibit the parasympathetic nerve function.

There is nothing wrong about these medications, but it is important to know that even minor anticholinergic side-effects of various medications that the patient may take, can add up. This effect is amplified in the elderly and in particular in elderly men where there is already a high percentage with a partial blockage of the urethra from prostate enlargement . As the urethra squeezes itself through the enlarged prostate, there can be suddenly a complete closure of the urethra leading to hospitalizing this patient with an acute urinary retention. Here is an example of such a patient.

Mr. Smith is a 55 years old salesman for a car company. He had in the past been diagnosed with GERD (gastro-esophageal reflux disease) for which he needs to take ranitidine 150 mg twice a day. Our patient also belongs into the 65% group of patients in this age group who have a benign prostatic hypertrophy (BPH). This had been diagnosed with a screening test for prostate cancer (PSA),which had been in the 20 IU range.

His doctor had sent him to a urologist, who did a series of prostate biopsies, which did not show cancer, but which confirmed BPH. This patient also went through a stressful part in his life and was put on an antidepressant called trazodone. He then had a cold and decided to get some over-the-counter antihistamine (Chlor-Tripolon) and that’s when things suddenly happened. He had already felt some pressure in his lower mid abdomen for a few weeks, but now after a few beer he suddenly could not pass any urine, but had a strong urge to do so and the pain in his lower abdomen got really severe and was associated with flank pain on each of his sides. He was admitted to hospital and a suprapubic bladder catheter was placed. Some of the medications were taken off (Chlor-Tripolon, and the trazodone) and soon he was able to void again. However, more tests were done and the urologist decided that a TURP (=transurethral resection of the prostate) should be done. Within a few days he could leave the hospital knowing that he would no longer get into problems with his BPH again.

Here is the explanation regarding this patient: This is an example where several negative factors mounted on top of each other. Because of the age related BPH the flow rate had slowly been reduced below the 600 ml/minute rate.

He also had a variety of conditions that he could not necessarily control. The ranitidine, the trazodone and the antihistamine all have anticholinergic side-effects, which were superadditive and led to an intolerance of the diuretic push induced by a few beer. In this patient there was a situation where the physicians decided to improve the urethral flow with a TURP  as the patient could not be completely kept off all of the medications. He is presently still taking the ranitidine and the trazodone, but has no problems with the urine flow and his kidneys are protected from hydronephrosis and eventual pyelonephritis. Unfortunately many patients wait until it is too late and the kidney damage is irreversible.

The symptoms of an enlarged prostate are more frequent urination, which over time is getting worse with smaller amounts on each trip to the bathroom being delivered, but leaving the patient with a feeling of urgency all the time. The patient also has to get up several times during the night (=nocturia).

The urinary stream is smaller in diameter and has less force. When the volume per second or per minute is measured, it is clearly deteriorating over time. This is directly due to the clamping down of the rubbery enlarged prostate gland around the upper portion of the urethra located directly under the bladder. This leads to retention of urine in the bladder, which can balloon considerably and this is felt as suprapubic pain (central lower abdominal pain). As the patient is more prone to urinary tract infections, this too can be a signal for the physician to check this patient for BPH.

On rectal examination the physician finds a rubbery, enlarged prostate gland. However, it is not hard as would be the case in prostate cancer. Blood test are done to look for kidney function and a PSA level. In 30% to 50% of BPH the PSA is elevated, which makes it difficult to delineate from prostate cancer where the PSA is positive in 30% to 95%, depending on the tumor size. The urologist will have to do some prostate biopsies to differentiate between these two conditions.

Surgery is the other approach. However, many men are afraid of losing their potency (=ability to have a penile erection). With the conventional TURP method (transurethral resection of the prostate) the rate of impotence is about 5% to 10%. However, with the laser beam methods there is only a rate of impotence of about 3 to 4 %. With the radio frequency thermal therapy of the prostate by transurethral needle ablation (=”TUNA”) the impotence complication rate is less than 2%. Essentially heat is used here to destroy the prostatic tissue immediately adjacent to the urethra without damaging the urethra. Whoever is the patient affected with BPH should discuss all these options with the treating urologist. The gold standard is still the original TURP, but there are now significant improvements that have been achieved since then.

As men age, there is a gradual loss of testosterone and progesterone production from the testicles and the adrenal glands. On the other hand as the man ages, there is more sex hormone binging globulins, which keeps these hormones bound and reduces the free hormone portion even more. In addition many men have a sagging, bulgy stomach (from overeating, too much beer and lack of exercise). The extra fatty tissue contains an enzyme, called “aromatase”, which produces estrogens out of circulating male hormones. The end result is a lack of male hormones, too much circulating estrogen and a lack of progesterone that could have kept the excess estrogen at bay. Dr. John Lee called this hormone constellation “estrogen dominance” (Ref. 10). He explains that this is the real reason for the enlargement of the prostate in the aging man as depicted in the table above. He further explains in Ref. 10 that eventually this leads to the development of prostate cancer. For decades physicians believed that a surplus of testosterone would be responsible for the development of prostate hypertrophy and prostate cancer. This was based on the observation of Dr. Charles Huggins that castration reduced testosterone levels. At that time it was not known that castration also removes a man’s estrogen production, as nobody thought about testing a man’s blood for female hormones. When saliva hormone tests and blood insulin tests are done, it is clear that with metabolic syndrome (=insulin resistance) often testosterone and progesterone levels are low, but estrogen levels are high. These men are at a high risk of developing BPH and prostate cancer.

It follows from this that when these dysbalanced hormones are restored to a new balance by replacing what is missing (testosterone and progesterone) and high insulin levels are reduced by Metformin and exercise/food changes (cut out sugar, starch and reduce fat intake), TURP’s for BPH can often be avoided and the development of prostate cancer also is often avoided. At the same time the desire for sex and normal sexual performance return as in a younger man (through the magic of hormone balance). I like to add that not every physician feels comfortable with this approach that comes from the new branch of anti-aging medicine. You may have to search for an anti-aging physician to get the appropriate bio-identical hormone creams prescribed.

10. John R. Lee: “Hormone Balance for Men – What your Doctor May Not Tell You About Prostate Health and Natural Hormone Supplementation”, © 2003 by Hormones Etc.