There are three major serious yeast infections that need to be dealt with here: sepsis, peritonitis and meningitis.

All of these are life threatening conditions, which when missed would quickly lead to death. The reason yeast infections are infecting a person systemically (such as in sepsis and in meningitis) is often because of a compromise of the immune system. In the case of peritonitis there usually is a defect such as a perforated ulcer or an intrusion from the gut after prolonged antibiotic therapy that dysbalanced the bowel flora and allowed the yeast bugs to penetrate into the normally sterile peritoneal cavity. Often in these conditions there would be a weakness of the immune system at the same time.

About 80% of the major fungal systemic infections are due to Candida albicans. It is the most common fungus infection in people with compromised immune systems such as cancer patients, AIDS patients, patients who are treated with chemotherapy for leukemia or cancer.

Any of the above conditions, particularly when coupled with other factors such as hospitalization or intravenous therapy for another illness or antibiotic therapy for bacterial infections, can suddenly turn into this emergency situation, Candida sepsis. Normally blood is sterile with no growth of bacteria or blood. However, with Candida sepsis blood cultures will suddenly grow Candida albicans, which would establish the diagnosis.

The only clue that a systemic yeast infection is present may be a high fever, weakness and further deterioration and symptoms similar to bacterial sepsis. On top of these symptoms there are the other symptoms of the underlying conditions such as esophageal candidiasis or other Candida infection as mentioned above. The eyes can get infected via the blood stream and this can turn into blindness, if untreated.

In a life threatening situation like this the physician will take all the necessary cultures (blood cultures and swabs) and send them to the lab. However, the physician will not wait for the results, but go with the clinical diagnosis and start intravenous therapy with the amphotericin B, which is an antifungal antibiotic, right away. By the time the cultures come back the patient is usually much better and the physician can now decide whether to switch the medication to another antifungal therapy, based on culture and sensitivity results. High dose fluconazole therapy may have to be given and in some AIDS patients and other high risk patients this may have to be continued on an ongoing basis as a maintenance therapy. 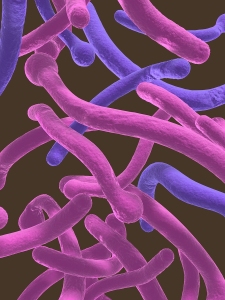 This is a serious illness, which usually happens in postoperative patients. Examples are patients who had an ulcer or a diverticular disease with an abscess, which may have perforated and was surgically repaired. Because of the bacterial peritonitis that these patients were found to have, high and prolonged antibiotic therapy for the bacterial peritonitis had to be employed. This can result at times in a therapy induced Candida peritonitis as one of the complications.

High fever and abdominal pain are the main symptoms. There is usually a rigid abdomen, which the physician will detect and the bowel sounds are absent when the physician uses the stethoscope to listen to the abdomen.

Treatment for this is usually intravenous amphotericin B.

This clinical entity usually does not occur without a prior history of a bacterial infection that was treated extensively with antibiotics. Or there may be an underlying other disease such as leukemia or a prior kidney transplant, for which the person is on immunosuppressive therapy. It is in these high risk settings that Candida meningitis occurs. It often occurs also when the patient is suffering from Candida septicemia. When yeast bugs are in the blood stream already, it takes very little for the infection to migrate via the blood stream onto the meningeal surfaces of the brain, which are normally bug free. When this occurs the patient gets sick very quickly and the physician needs to act fast to rescue this patient.

Candida meningitis tends to not be as acute as bacterial meningitis. However, the symptoms are similar, only they are developing over several days or weeks instead of in one day as with bacterial meningitis. Headaches, a stiff neck, fever, vomiting are all warning signs. With no treatment this will progress to a drowsiness, unconsciousness, possibly seizures and death. The physician will intervene and do a thorough neurological examination, a CT scan and a lumbar puncture to obtain a cerebrospinal fluid sample for culturing. Following this there likely will be institution of therapy.

There is no standard regimen for Candida meningitis. Usually amphotericin B intravenously is the therapy of choice. Sometimes this has to be given through a catheter intrathecally (into the space where the cerebrospinal fluid is, so that the medication reaches higher concentrations in the meningeal area. Depending on the results of the culture and sensitivity testing this regimen may have to be combined with flucytosine, another antifungal medication. In AIDS patients there have been a number of cases where resistant yeast infections have been found and several newer antifungal medications in combination may have to be given by the physician (Ref. 1, p. 1220).