If the skin infection described under “chromomycosis” is invading from a local infection into the rest of the body, this is called a phaeohyphomycosis. This is happening a lot more in immunocompromised patients such as in the presence of AIDS,  in patients with poorly controlled diabetes or in patients with cancer.

Step 1: the roots. “pheo” or “phaeo-” is a term originating from the Greek word “phaios” meaning dun, dusky or brown.”Hyphomycosis” has its roots in the Greek “hyphe” meaning web and “mykes” meaning fungus. Hyphomycetes is a species of imperfect fungi that can multiply in the skin (to be contrasted with imperfect yeast infections such as monilia).

With phaeohyphomycosis the pigmented fungi spread to other parts of the body, likely either through the lymphatic system or through the circulatory system. This way chronic festering infections of the sinus cavities, bones, joints, lungs, heart valves (=endocarditis), brain (=brain abscess) or the meningeal membranes (=meningitis) can occur. Also, there can be nodules or abscesses can show up under the skin, in regional lymph glands of infected skin or organs. Even internal bleeding can happen when a local abscess erodes a major blood vessel. Systemic spread like this is facilitated when the immune system is weak such as in AIDS patients or in patients with cancer or diabetes out of control.

Here is a picture of a child with phaeohyphomycosis (thanks to www.moldinspector.com for this image).

Depending on what organ system is involved, the symptoms change. For instance, with involvement of the heart valves, such as in endocarditis, depending on the severity there will be circulatory symptoms with signs of congestive heart failure such as cyanosis (bluish skin discoloration), shortness of breath, weakness etc. With a lung lesions there might be a cough, shortness of breath and chest pains. X-rays would show lesions that would be followed up with further investigations such as bronchoscopy or lung biopsy.

Biopsies of diseased tissue are sent to the pathologist who will use special melanin staining techniques to diagnose this condition. Ultrasonic tests, CT or MRI scan testing as well as regular x-rays are all helpful in assessing the extent of the disease. 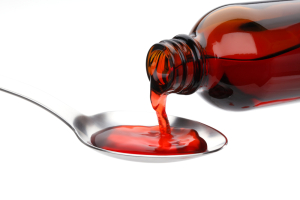 This can be particularly difficult to treat. This article discusses one such case that was difficult to treat (thanks to cid.oxfordjournals.org for this link). The newer antifungal agent posaconazole suspension (NOXAFIL, 200 mg per teaspoon) was given 4 times per day after meals and successfully treated this systemic fungal infection.