Deficiency of ADH (=also called “vasopressin”) has been described under “diabetes insipidus”. There is no posterior lobe tumor known that would produce oxytocin, nor is there a known deficiency condition regarding oxytocin.

However, clinically in obstetrics it is common to have patients with prolonged labor and delivery with a subsequent postpartum hemorrhage. At such times there is no time for studies, as this is an emergency situation, however, some of these cases likely are due to a lack of natural oxytocin leading to a uterus that does not contract adequately. This can be treated with oxytocin injections or infusions after retained placental issue has been removed. 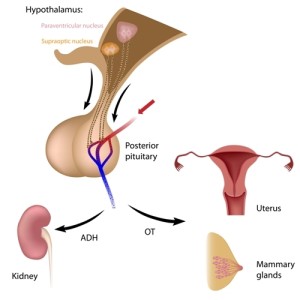 Also, some cases of labor where uterine contractions fade in a prolonged delivery may be due to inadequate oxytocin production in a woman in labor who is exhausted. Here careful labor augmentation with a smaller amount of Syntocinon (=brand name for oxytocin) can lead to normalization of the remaining delivery, provided there are no other underlying problems. For an overdue pregnancy at 42 weeks or more (normal is 38 to 42 weeks) an induction with a “Syntocinon drip” can be a godsent.