Depending on where an interruption (medically called “lesion”) of the optic pathway takes place, there would be a different, but very characteristic field of vision loss.

For instance, as the link shows, an interruption of the right optic nerve from a right-sided orbital cavity fracture would lead to total blindness in the right eye.

However, a right-sided skull at the optic chiasm would lead to a field defect in both outer (=temporal) visual field halves (called “bitemporal hemianopsia”). On the other hand, if a skull fracture in the very back of the right skull or a stroke just to the right of the midline damages the visual cortex of the brain (number 4 lesion in the illustration of the above link), about 1/3 of the inner (nasal) half of the visual field of the right eye and 1/3 of the temporal half of the left eye visual field would have disappeared.

The neurologist and eye specialist can pinpoint through detailed visual field testing where in the higher visual pathways the lesion would be. A CT or MRI scan can be used to confirm the clinical findings. 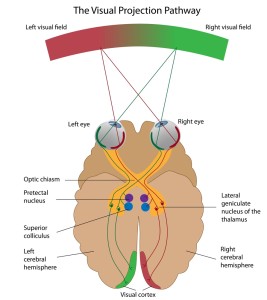 The signs and symptoms depend on the underlying pathology on the one hand and on the type of lesion that causes the interruption of the visual pathway on the other hand. If, for instance, a pituitary tumor causes the lesion there could be headaches with vomiting, weakness from lack of ACTH etc. and, depending on whether the pressure occurs in front or behind the optic chiasm, there would be different findings as mentioned under “introduction” above. With a tumor in front of th chiasm there would be a “bitemporal hemianopsia” (meaning a visual field loss on both outer sides). With a stroke there would be other associated symptoms and symptoms would be different again following a skull fracture where there would be a history of trauma prior to the visual loss.

A thorough history and physical examination is done first including a visual field test. Depending on the findings it may be necessary to do other tests such as a CT scan, MRI scan or even a PET scan in some special cases. Special views of the pituitary gland or of the orbital cavity may have to be requested from the radiologist. Blood tests and in particular hormone tests of prolactin, ACTH, TSH, LDH and FSH will help to pinpoint what kind of pituitary tumor is present and this would be confirmed as well by CT or MRI scans.

Depending on what the diagnosis is after the testing has been completed, the treatment will be specifically directed at the underlying lesion that has been identified. This may involve several specialists such as an eye specialist, a neurologist, a neurosurgeon and in case of a pituitary tumor an endocrinologist as well.