Research on prevention of AMD

Initially the evidence was that supplementation would not change the outcome of AMD (Ref.4). However, a Spanish study showed that there are clear deficiencies in older patients (average age 78 years) of lutein and zeaxanthin, not so much in the obese population, but in the leaner person. This was interpreted as being due to inadequate food intake. In an Italian study where lutein (10 mg), zeaxanthin (1 mg) and astaxanthin (4 mg) were given as supplements the eye specialists could measure definite improvements in the treatment group, but not in the control group over a period of two years (Ref.6). Ref. 7 examined several large trials and found that in the more advanced stages (category 3 and category 4) of AMD supplementation with lutein, zeaxanthin and astaxanthin caused a leveling off of the disease process with an improvement of vision in the treatment group. They came to the conclusion that it would be very difficult to show that improvements occur in the milder forms of AMD (category 1 and 2) as it would require a trial with approximately 17,000 subjects, followed for 5 years to show a significant improvement from supplementation. This information was not mentioned in Ref. 4. Ref. 7 also points out that there could be adverse effects with higher than 400 IU vitamin E as this has been associated with a 4% higher mortality risk, higher prostate cancer risk and an elevated risk of heart failure in people with pre-existing disease (left ventricular dysfunction, diabetes mellitus, recent myocardial infarction).

Age and tobacco smoking have been known for some time to be the two major risk factors for the development of AMD. However, hypothyroidism has recently been found to be a risk factor as well (Ref. 9). A close follow-up by an ophthalmologist is needed for all patients with AMD to treat the treatable causes of deterioration. I like to mention that it cannot harm to add lutein (10 mg), zeaxanthin (1 mg) and astaxanthin (4 mg) to general measures of a healthy diet and regular exercise to prevent AMD or prevent further deterioration of it in those who are suffering from it. 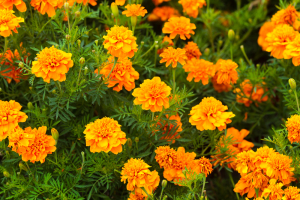 Prevention Of Macular Degeneration (Lutein Is Extracted From Marigolds)

As is outlined above with Dr. Rozakis’ theory of AMD being due to steroid hormone deficiency, one would expect a clinical improvement with lifestyle intervention and bio-identical hormone replacement. Ref. 11 gives hints that Dr. Rozakis has treated some patients with AMD aggressively with bio-identical hormones and lifestyle intervention and it appears that they have improved. However, I could not find any recent publications in PubMed or on a Google search about a number of such cases with documented clinical improvements as one would expect, if the theory were true. The outcome regarding this will have to be awaited.