It has been assumed that a pussy discharge, which is commonly diagnosed as rhinitis would always be bacterial and a more watery nasal discharge would be viral.

Studies have shown a different picture. Many times severe acute rhinitis that obviously is infectious, is actually viral when evidence based medical studies are done. Ref. 3 give an overview from a group of emergency medicine physicians who have reviewed the evidence based literature.

First they found that isolated rhinitis and sinusitis does not exist. Any upper respiratory infection starts in the nose and simultaneously affects the sinuses as well, but the sinuses are only really symptomatic in the moderate and more severe forms of the rhinosinusitis (that’s the name they used in this article).

Pussy rhinitis or rhinosinusitis is one of the 10 most common diagnoses in the office setting. 25 million Americans in the U.S. see their physician at he office every year for this condition. Patients call any nose infection that leads to facial fullness and a plugged up feeling “sinusitis”. Physicians call “sinusitis” the condition that leads to an accumulation of secretions (“purulent effusion”) in the sinus cavity with upper toothache on one side only or extreme one-sided facial pain with a high fever.

This latter more narrow definition of sinusitis has a higher likelihood of being the bacterial sinusitis as dealt with under “Sinusitis” (see under “Related Topics” below). All other cases of pussy nasal discharge from both nostrils, particularly within the first 7 days of a cold or rhinosinusitis is usually viral when the appropriate viral studies are done and sinus punctures with cultures were done in evidence based trials (reviewed in Ref. 3). 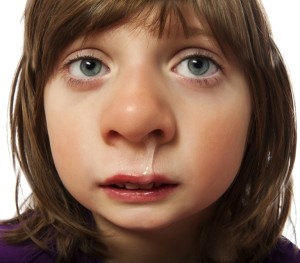 Only less than 2% of all viral upper respiratory tract infections are complicated by bacterial rhinosinusitis! As most people do not see their physician about every cold, only 15% are seen in doctors’ offices or walk-in-clinics. According to Ref.3, if all patients with bacterial infections were seeing their physicians only about 13% of patients seen by the physician should receive antibiotic treatment. However, close to 100% of those patients receive antibiotic therapy. This has created the problem of resistant bacterial strains as bacteria learn how to chew up antibiotics, if they are exposed to them long enough.

So, who should get antibiotics? Only those how have a high probability of having true bacterial rhinosinusitis. I have summarized the answer to this question from data provided in Ref.3 for you below.

Who should get antibiotics?

We know from controlled studies, where sinus cavity punctures were done as part of the studies, that in bacterial infections there were at least 100,000 bacteria per milliliter in the pus sample and at least one ot the typical bacteria that was cultured: Streptococcus pneumoniae or Haemophilus influenzae. Occasionally there was also Streptococcus pyogenes or Moraxella catarrhalis that was isolated.

Many studies in the last 30 years have established these bacteria to be part of bacterial rhinosinusitis and sinusitis.

In Ref. 3 the evidence is very clear that a reliable diagnosis cannot be made in the beginning. To do sinus punctures routinely would be absurd and unreasonable.

However, if three of the symptoms listed in the table above are positive at 7days, there is a probability of 80 to 90% that the diagnosis of bacterial rhinosinusitis is correct. For this condition antibiotic therapy is reasonable. However, as mentioned above, this would only be for about 2% of the total cold population (about 13 to 15% of the population seen by the physician). If in doubt at 7 days into the cold, a nasal swab could be taken to see if pathogenic bacteria can be isolated in the laboratory.

The vast majority of patients who do not fulfil the criteria above would simply inhale with hot steam to moisturize the airways and facilitate a spontaneous recovery from the illness.

Xylometazoline (Otrivin) is also a useful measure to keep the nasal passages open (comes as nasal solution). The other 2 to 3% of the total cold population would need amoxicillin, or if the bacterium is resistant in the region where the patient lives (proven by culture & sensitivity) another antibiotic would be prescribed by the physician. Placebo studies have shown that those who do not get antibiotics have a recovery rate of about 56%, whereas those on amoxicillin for 10 days had a response rate of about 89%, only a 35% advantage. This is due to a dilution factor, because a large portion of the study was likely still viral in origin (Ref.3), hence the good response in the placebo group.