It is important to realize that this bone tumor is highly malignant and is also called “osteogenic sarcoma”. It is almost as common as multiple myeloma.

Another key point is that it occurs most frequently in young persons aged 10 to 20 years, but can occur at any age group. About 2 new cases per million people occur per year. It must be remembered that more than half of the osteosarcomas occur in the knee area. 25% of the cases occur in the upper arm close to the shoulder and others will occur at any bone site. Between 80% and 90 % of osteosarcomas grow in the long tubular bones of arms and legs. Hands, feet and the spine are relatively spared. The incidence of spontaneous fractures is rare, less than 1%.

To emphasize, bone pain at the site of the tumor is the earliest and most common complaint. Examination by the doctor reveals a soft tissue mass, which is fixed to the underlying bone and is slightly tender with the examination.

In essence, X-rays are the next step and these reveal typical findings for osteosarcoma.

The characteristics are varied with increased density in the bone marrow area, an area of radiolucency due to non calcified tumor mass, an area of bone destruction with poorly defined borders and an area of extension beyond the bone with soft tissue calcification. Notably, there is no other lesion, which would have this characteristic appearance on X-rays imaging. Certainly, the orthopedic surgeon likely will do a bone biopsy in one or more typical areas of the bone cancer and send this to the pathologist for verification. By all means, the alkaline phosphatase is a blood test that can be very high and would be associated with a poor prognosis. To emphasize, it has been found that alkaline phosphatase is located in the cell membrane of the osteosarcoma cells. 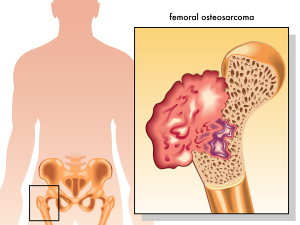 In this case, in the past treatment would now have consisted of amputation of the affected area. However, on the contrary preoperative chemotherapy with doxorubicin and methotrexate and/or postoperative chemotherapy has allowed the orthopedic cancer surgeon to develop so-called “limb-sparing” surgery. This type of approach also allowed for surgical removal of solitary lung metastases by thoracotomy (approach via the chest cavity) with the help of a chest surgeon. Using repeat blood tests checking the alkaline phosphatase level allows the surgeon to monitor for the success of tumor removal. Using these methods and monitoring the patient closely has resulted in tremendous improvements of the long-term survival. Many centers have 5 year survivals of more than 75%. Many trials are now concentrating on improving these figures even more.

Here is a link with more details about the multidisciplinary approach to osteosarcoma.