Ankylosing spondylitis is part of a larger symptom complex of so called “spondyloarthropathies” that affect the spine and the insertion of tendons and ligaments.

They are distinct from rheumatoid arthritis, and they include apart from ankylosing spondylitis also Reiter’s syndrome, psoriatic arthritis, and enteropathic arthritis (ulcerative colitis, Crohn’s disease).

There is clustering of cases in certain families who have a genetically changed cell surface antigen, called “HLA-B27” and “HLA-B7” (Ref. 2) that is found on white blood cells in patients with ankylosing spondylitis. Also, males are about 2 1/2 times more frequently affected with this than females. Chronic back pain is more common in males than in females with ankylosing spondylitis (Ref. 1, chapter 12). It begins often in the age group of 20 to 40.

Here is the frequency of some of the various types of spondyloarthropathies in the population (modified from Ref. 1, p.48). 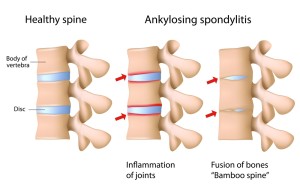 Frequency of cases of spondyloarthropathies