One of the main symptoms of ankle pain, the common denominator of all these conditions although so different, is pain in the ankle. When the joint surface or the synovial membranes of the joint are involved as in the case of an arthritic condition, there is usually a decreased range of motion. There can also be redness and swelling around the joint area.

If there is an effusion, which is an accumulation of inflammatory joint fluid, the bone markings can be hardly visible because of the massive enlargement of the joint. The joint is then extraordinarily tender and any motion in the joint becomes extremely painful. When there is end stage arthritis (thanks to www.parkwayphysiotherapy.ca for this image) in the ankle joint, fusion surgery may be the only solution for pain control. With circulatory problems in the veins there is a dull ache in the joint and varicose veins would be visible.

Often there can be an associated leg ulcer of the skin in the lower leg around the ankle, which does not want to heal. In the case of arterial circulation problems there is often intermittent claudication. This means that the patient can walk a block or two, but then cramps in the lower leg muscles set in and the patient is forced to stop walking and to rest until walking can be resumed. The lack of oxygen in the muscles and ankle joint are the cause for pain as lactic acid is accumulated irritating the nerve endings.

Complex regional pain syndrome is another source of ankle pain. There are two types, called type I (formerly called “reflex sympathetic dystrophy”) and type II (formerly called “causalgia”). With type II (CRPS II) the injury ( often a “crush injury”) causes direct damage to a nerve in the skin or deeper in the body. This pain syndrome sets in right away with a deep gnawing pain as well as another type of pain that can be caused already by lightly touching the skin in the area. In type I complex regional pain syndrome a similar pain pattern develops, but there is a lag time of 2 to 3 months before this pain pattern develops. Often following a fracture with casting, when the cast is taken off such a CRPS I can develop unless aggressive physiotherapy to remobilize is done right away. 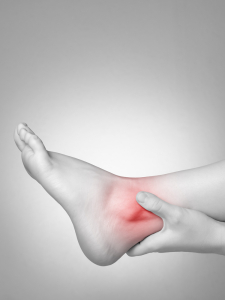 With cancer related ankle pain there would be clues that something else is going on. For instance, there could be a history of breast cancer in a woman and years later she may develop ankle pain. When tests are done it could show that this is due to a single bony metastasis in the ankle bone or else this might be just one of the many other bone metasatses that develop at that time. A bone scan would show other locations of bone metastases. In multiple myeloma there would be several other myeloma bone lesions and the blood work would show corresponding monoclonal myeloma protein peaks.