Sometimes the endometriosis even grows onto the surrounding bowel in the pelvis and can cause an acute emergency, particularly when there is associated bleeding into the abdominal cavity.

Some facts about endometriosis

This is a disorder where the lining of the uterus (called “endometrium”) migrates through the fallopian tubes to one or both ovaries where it forms cysts on the ovary. This is non-malignant, but very painful and fluctuates in symptoms with the normal periods as the endometrium still undergoes the cyclical transformation outside the uterus as it does inside. The bleeding around the period time into the abdominal cavity produces most of the symptoms of endometriosis. Here are a few facts you may want to know: 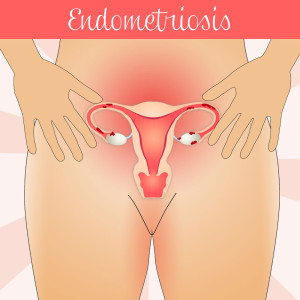 Endometriosis can cause painful periods

The main symptoms of endometriosis are lower abdominal pain
and pelvic pain, heavy period, irregular periods and infertility. The physician may feel a pelvic mass on pelvic examination.

The woman may give a history of painful periods (dysmenorrhea) while in the past she always had pain-free periods. She might also disclose that she has painful sex shortly before or around the time of her period (called”dyspareunia”). If there is bladder endometriosis or colon endometriosis, there might be lower abdominal pain, pain during urination and rectal bleeding during menstruation. On the other hand endometriosis on the ovaries can grow deeper into the ovarian tissue and form cysts (called “endometriomas”) into which it bleeds every 28 days. The blood can experience a transformation and turn dark brown (called “chocolate cysts”, often measuring 2.5 cm or 1 inch in diameter).

The cysts can also develop between the ovary and the large intestine or the bladder causing a pelvic mass that is glued together with chocolate cysts. Sometimes bowel obstruction can occur with such a complex mass, which might be the first clinical presentation of endometriosis, diagnosed during an assessment of acute abdominal pain at the Emergency Room of the hospital. The good news in this situation is that the bowel obastruction is not cancerous. The bad news is that it still requires major surgery to correct the condition. Sometimes the scarring after such a surgery might lead to further bowel obstruction from adhesions. They consist of fibrous bands between bowel loops associated with abdominal pain and occasionally it can also cause bowel obstruction. Surgery may be required again at that point to take care of the adhesions.

Adenomyosis may simply be a variation of endometriosis, where the endometrium is invading the uterine wall.

Before the gynecologist will do anything, there needs to be a thorough assessment of what is going on. Depending on the symptoms this might involve a pelvic ultrasound case study, a voiding cystourethrogram (=X-rays of bladder and ureters), a Barium enema (=X-rays of the rectum and sigmoid colon), and possibly an MRI or CT scan. There might be some blood tests required for serum cancer antigen-125 as well as anti-endometrial antibody levels. The gynecologist may also want to do infertility studies, if there is an infertility problem. There are 4 stages of endometriosis that have been defined:

Stage 1: minimal endometriosis with only a few superficial lesions

Stage 3: moderate endometriosis with several deep implants and also small endometriomas on one or both ovaries

Stage 4: severe endometriosis with many deep lesions, large endometriomas, often on both ovaries and often causing dense adhesions between the back portion of the uterus and the rectum

The treatment by the gynecologist will vary according to the stage found. In stages 1 and 2 the gynecologist may want to use a medical approach with several different medications such continuous birth control pill, danazol (brand names: Danocrine, Cyclomen) or a short treatment period of gonadotropin-releasing hormone analogue (brand name: Synarel).

However, Synarel cannot be given longer than 6 months because of osteoporosis as side effect with prolonged use. Pregnancy rates with medical treatment are 40% to 60%.   If medical treatment fails in stages 1 and 2, or for stages 3 and 4 surgery would be required. Laparoscopic surgery can remove smaller endometriosis lesions, cauterize them, vaporize or excise them by laser surgery.

With surgical treatments pregnancy rates are 40% to 70%, but the higher the stage of endometriosis the lower the success rate. Abdominal hysterectomy is reserved for patients with severe pelvic pain that has not responded to any of the other measures, and where the women have finished the reproductive phase in their lives (all child wishes have been fulfilled). Usually the ovaries have to be removed along with the uterus (ovariectomy). Following the hysterectomy and ovariectomy hormone replacement therapy is started using estrogen. However, if some endometriosis lesions had to be left behind, continuous progestin therapy has to be given along with the estrogen to prevent malignant transformation into endometrial (=uterine) cancer in future.

Dr. John Lee (Ref.26 and 27) has written extensively about the connection of endometriosis to both estrogen dominance and a lack of progesterone. Xenoestrogens, which are estrogenic substances in the environment (diethylstilbestrol, polychlorinated biphenyl or PCB, Bisphenol A etc.), but also petrochemical xenohormones such as pesticides can block estrogen receptors leading to a lack of ovulation and subsequent lack of progesterone. The body produces more androgens (male hormone products) that get transformed into estrogen in fatty tissues such as the breasts. The excess estrogen levels over stimulate the lining of the uterus, which in turn is responsible for the development of endometriosis.
For a woman with endometriosis bioidentical progesterone cream is given with daily doses of 40 mg to 50 mg per day (given as a cream in divided doses twice per day) from day 8 or 9 to 26 of the cycle. With this treatment protocol it can take up to 6 months for symptoms of endometriosis to subside. Some women continue to have some residual symptoms. This treatment protocol must be continued until menopause to prevent recurrences and complications. It must be stressed here that only the natural, bioidentical progesterone (available through compounding pharmacies) will be effective, not one of the synthetic progestins.

Adenomyosis is treated very successfully with a hysterectomy either through the vaginal approach or the abdominal approach, occasionally also if feasible through the abdominal laparoscopic approach. However, before a hysterectomy is considered, give the bioidentical hormone treatment a try. Within 2 to 3 months your symptoms may have abated and surgery may not be necessary.

26. Dr. John R. Lee, David Zava and Virginia Hopkins: “What your doctor may not tell you about breast cancer – How hormone balance can help save your life”, Wellness Central, Hachette Book Group USA, 2005. Page 360 to 374 explains xenohormones. Page 184 and pages 251 and 252 describe the dosing of progesterone in endometriosis.