Strokes are rare in adults below the age of 60. A University of Maryland School of Medicine study found that different blood group types have different rates of strokes.

He said: “We still don’t know why blood type A would confer a higher risk, but it likely has something to do with blood-clotting factors like platelets and cells that line the blood vessels as well as other circulating proteins, all of which play a role in the development of blood clots. We clearly need more follow-up studies to clarify the mechanisms of increased stroke risk.”

The lead author was Ms. Tessa Kole, a Master’s degree student at the University Medical Centre Groningen, the Netherlands. She said: “In future, blood group should be considered in risk assessment for cardiovascular prevention, together with cholesterol, age, sex and systolic blood pressure. It could be that people with an A blood group should have a lower treatment threshold for dyslipidemia or hypertension, for example. We need further studies to validate if the excess cardiovascular risk in non-0 blood group carriers may be amenable to treatment.” 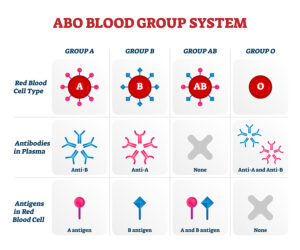 At the present time researchers just noted an association between blood groups and risk for strokes and heart attacks. The same is true for blood groups and the ability to fight Covid easier or have a harder time. One has to look at all the risk factors and avoid what is detrimental. Included in this is cigarette smoking and drinking too much alcohol. Regular exercise also strengthens the body. Future research likely will explain how blood groups influence the clotting mechanism and the immune system.