Why some are Early Birds and some are Night Owls

I am discussing here why some are early birds and some are night owls. Whether you are an early bird or a night owl seems to be genetically determined. CNN reviewed this in this article. The majority of people get tired around 10 PM, they get to bed and sleep for 7 to 8 hours before they get up again. But there are two small minorities, the early birds: they go to bed earlier. And there are the night owls who go to bed much later and sleep much longer. Most people have a mixed sleep pattern, which is in between the early birds and the night owls.

New research from nature communications determined that there are 351 genetic locations on our chromosomes that determine whether we are morning persons (early birds) or not.

The publication in nature communications

An international investigation included several universities and research organizations in the US, the UK, Germany, the Netherlands and Australia. 250,000 people were enrolled through 23andMe, while 450,000 people participated through the UK Biobank. 351 genetic locations were identified that determine why some are early birds and some are night owls. But these genes do not only regulate the circadian rhythm, but other tissues as well. The target organs relate to the brain and to retinal tissue.

Mismatch between the internal clock and the 24-hour cycle

The body clock cycle is slightly longer than the 24-hour cycle. The genes in the eyes help early birds to reset the internal clock. This way they are in sync with the natural sunlight. Weedon and co-workers from the publication in nature communications found that early birds have a clearer mind in the morning. They also have more subjective well-being and have less risk to develop schizophrenia and depression. Some of these protective genes present in early birds are missing in night owls.

In previous studies it was concluded that night owls would be more prone to develop obesity and type 2 diabetes. However, the genetic study from nature communications failed to demonstrate such a connection.

There are other factors, for instance what diet we eat, what daily activities we do that affect our chronotype (early birds or night owls). Exposure to sunlight and artificial light at night also plays a role as to how our circadian rhythm works.

Comments by other investigators

Dr. Zachary Freyberg is an assistant professor of psychiatry and cell biology at the University of Pittsburgh. He said that the size of the study was impressive and the linking to genetic loci. However, he cautioned that the statement that night owls would be more prone to depression and schizophrenia needs to be confirmed in other studies.

Suzanne Hood is an assistant professor of psychology at Bishop’s University in Quebec. She commented that the same areas of DNA that were found in previous research studies were associated with circadian rhythms. But she had an additional question. In her own research she noted that people in older age become more like morning persons. This seems to be due to age-related changes in the circadian rhythm. 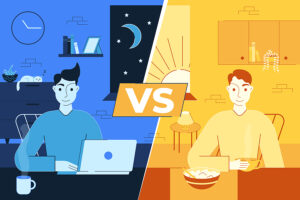 Why some are Early Birds and some are Night Owls

Why some are early birds and some are night owls seems to be triggered by our genetic material. This study describes 351 genetic locations on our chromosomes that determine whether we are morning persons (early birds) or not. In previous studies it was concluded that night owls would be more prone to develop obesity and type 2 diabetes. However, this much larger genetic study failed to demonstrate such a connection. Instead, the study revealed that depression and schizophrenia are more associated with the circadian rhythm of night owls rather than that of early birds. Scientists not involved with this study feel that other studies are necessary to confirm the findings. It is particularly important to research the possible link to depression and schizophrenia more closely, which seems to be a risk for those who stay up late.