During the warmer season mosquitoes like to attack us, but why do mosquitoes like human blood? There are approximately 3500 species of mosquitoes in the world, but only a few species are biting humans. One of the more important mosquito varieties that are of concern is the Aedes aegypti mosquito. It spreads dengue fever, Zika, yellow fever, and the Chikungunya virus. Noah H. Rose et al. researched the biting preference of this mosquito. The researchers placed special traps across 27 locations across sub-Saharan Africa to study eggs of these mosquitoes. In the lab they tested various mosquito populations with regard to their preferences for the scent of people versus the scent of animals.

The following evolved from this research.

Biting preferences are located in only a few genes

The researchers could show that only a few genes of the genome control the mosquitoes’ stinging behavior. Researchers are saying that climate change in the next few decades is not likely to cause dry season dynamics. But urbanization and dense population in Sahara Africa will likely cause mosquitoes to bite more humans than before. Many cities across sub-Saharan Africa will feel the effect of this in the next 30 years.

The Anopheles mosquito is the malaria transmitting mosquito. But it can also transmit heartworm to dogs.

Malaria is still a serious human disease. There are 5 different plasmodium species that a bite from an Anopheles mosquito can transmit.

With heartworm a dog is bitten by an Anopheles mosquito that carries a precursor of Dirofilaria immitis. If the dog is bitten, the full heartworm can develop.  It grows as filaments in the dog’s heart and lungs causing a serious life-threatening disease. 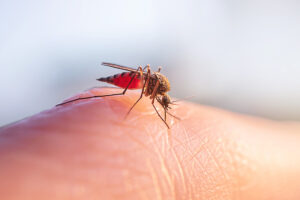 The Aedes aegypti mosquitoes can cause dengue fever, Zika, yellow fever, and the Chikungunya virus to spread in their human targets. A research paper examined the biting preference of these mosquitos, human versus animals. They found that in densely populated urban places, the same species of mosquitoes were attracted to humans much more than in rural or wild places. Mosquitoes living in hotter and longer dry seasons prefer to sting humans rather than animals.

Conversely, another mosquito, namely the Anopheles mosquito is the malaria transmitting mosquito, which can also transmit heartworm to dogs. This mosquito is biting humans all the time, but it also can bite cattle and goats, even during the same evening. Some Anopheles mosquitoes prefer animals, others prefer humans as hosts. The latter are more dangerous as they transmit malaria. Researchers need to determine what can influence the mosquito biting preference, human versus animal. But this is still in the future.

At this time, we cannot rely on speculations and research. Mosquito control remains important. Mosquito nets are not useless or old-fashioned, and to stay healthy if we live or travel in the tropics, insect repellent is a must.