Weed Can Harm Your Heart

It is important to realize that the American Heart Association (AHA) is warning that weed can harm your heart. The Association published a statement on the effects of cannabis on the heart. Specifically, an expert panel reviewed the literature of cannabis and the side effects it has on the heart, the arterial vessels and the rate of heart attacks and strokes.

The AHA medical group stated that smoking marijuana can lead to irregular heartbeats within one hour of smoking a joint. THC, or tetrahydrocannabinol, the psychoactive component of marijuana that makes you high is also responsible for tachycardia (fast heart beat) and atrial fibrillation (irregular heart beat). In addition, it disrupts the walls of arteries, increases the heart’s need for oxygen and causes blood pressure to rise.

Robert Page II chaired the medical writing group for the AHA statement. Page is a professor in the department of clinical pharmacy and physical medicine/rehabilitation. This is at the University of Colorado Skaggs School of Pharmacy and Pharmaceutical Sciences in Aurora, Colorado. Page said: “Cannabis smoke contains components similar to tobacco smoke”.

He further said that after smoking marijuana weed smokers’ blood showed tobacco-like increases in carbon monoxide and tar. This was independent of the THC content.

Over a longer period of time these changes from smoking marijuana can lead to heart attacks and strokes.

Page added: “There is an “urgent” need for carefully designed, prospective short- and long-term studies regarding cannabis use and cardiovascular safety”.

When I heard that people are starting to mix cannabis into foods, it reminded me about a story that one of my patients told me in the mid 1980’s. He worked in the shipyards of North Vancouver. One day he saw cookies on a tray in the lunchroom. A co-worker offered some to him and he ate it. After 5 minutes his head started pounding with an excruciating headache and he became nauseous. Shortly after he vomited and started getting a rapid heartbeat. His co-workers laughed and told him that these were very special cookies contained marijuana.

I suspect that whoever baked these cookies used a higher dose of marijuana, and as a result my patient experienced a marijuana overdose.

This example illustrates that cannabis has special properties that affect the body.

There may be a place for chronic pain patients under the guidance of a physician to use medical marijuana. But keep cannabis away from your food. Don’t consume it! You have no idea what you are doing to your body that is full of receptors for cannabis. Cannabis needs to be handled like a drug. This means a doctor should prescribe marijuana and the patients should take it according to doctor’s orders. Like with any drug there will be effects and also side effects. 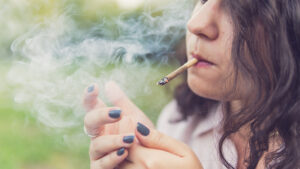 Weed Can Harm Your Heart

The newest development is that marijuana can lead to fast and irregular heartbeats. It also can lead to premature hardening of the arteries and cause premature heart attacks and strokes. The medical profession is lagging behind the increased use of marijuana. But in future there will be more controlled studies and possibly FDA regulations. In the meantime, there is a warning from The American Heart Association (AHA) that cannabis smoke contains components similar to tobacco smoke. This means you should treat marijuana smoking similar to cigarette smoking. The best is to quit smoking it; the only other choice is to smoke it in moderation.

The above contains parts of this previous publication.