Vitamin D has been in the limelight during 2014 several times, and the observation that vitamin D helps childhood atopic dermatitis (AD) is no exception. The news that this difficult to control skin condition in children can be treated effectively and cheaply (no Big Pharma drug involved) will be welcomed by parents.

The study was published in the Journal of Allergy and Clinical Immunology and is entitled “Randomized trial of vitamin D supplementation for winter-related atopic dermatitis in children.”

It started with the premise that atopic dermatitis, a disease, which often gets worse during the wintertime, may benefit from vitamin D, the sun hormone/vitamin.

Carlos A. Camargo, MD, Dr.PH from the Massachusetts General Hospital was the principal investigator of the study, which was conducted by Boston University and was supported by a grant from the NIH. 107 children in Ulan Bator (alternative spelling Ulaanbaatar), Mongolia were involved in the study. These children were preselected as having the seasonal form of atopic dermatitis which tends to get worse in winter versus the year-round version. Their age range was 2 to 17 years. Treatment consisted of 1000 IU/day of cholecalciferol (better known as vitamin D3) versus placebo for 1 month. All parents were instructed about the use of skin emollient that was given to them as well (experimental group and placebo group); there also was basic patient education about atopic dermatitis and basic skin care. The clinicians evaluated each child using a baseline measurement of the severity. In order to enter into the study a certain severity had to be documented. In the experimental group with vitamin D3 the severity score was reduced by about 8.5%, which was statistically significant. 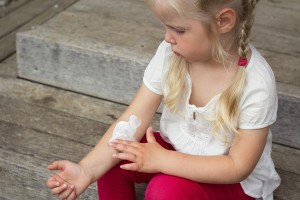 Comment: The reduction in score that I calculated into an 8.5% improvement, is not a very big difference. Other investigators may have considered to include several treatment groups with concentrations of vitamin D3 of 500 IU, 1000 IU (which was only used here), 2000 IU and 5000 IU, given that this vitamin is extremely non-toxic and the higher concentrations may have shown a 15 or 20% reduction of skin lesions.

On November 14, 2014 another group published a study entitled “Recent advances in epidemiology and prevention of atopic eczema.” They studied the protective effect of applying emollients daily to the skin of newborns and found impressive reductions of atopic dermatitis by 32% to 50% of the treated infants. The group suggested that it would be interesting to investigate the role of food and/or inhalant allergies and probiotics in the role of atopic dermatitis.

Conclusion: Both emollient protection of the skin of sensitive newborns and young children as well as protection with daily supplements of at least 1000 IU (higher doses of 2000 to possible 5000 IU would be better) are now known to help atopic dermatitis with 40 to 58% improvement scores.