New research shows that vitamin C intravenously for cancer treatments amplifies the effects of conventional cancer therapies, such as chemotherapy or radiotherapy.

In a 2014 trial with ovarian cancer patients the investigators found that vitamin C increased the effect of standard chemotherapy, yet decreased the side effects of it.

How to achieve high levels of vitamin C

In order to reach high levels of vitamin C in the blood , the patient has to receive it intravenously. Researchers aim to get the blood levels to 20,000 μM/L. As this link shows typically one requires a dose of 50-60 Grams of vitamin C intravenously to achieve that. In addition, human safety studies have passed, so it is safe to give such high doses of vitamin C.

Past experiences with intravenous vitamin C

It is somewhat humorous that these safety studies are receiving attention now after Dr. Fred Klenner has used intravenous vitamin C from the 1940’s to 1970’s, and many other physicians used this method also.

Dr. Abram Hoffer has done an experiment on end stage cancer patients, which I have described in detail in a blog. On average there was an 8-year survival advantage of the mega vitamin group versus the control group. But while high vitamin C was given to the patients, they also received other vitamins and minerals in addition. 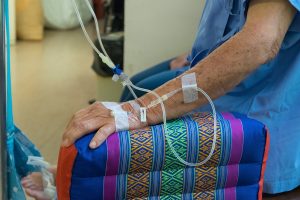 High doses of vitamin C have been among the treatment protocols of alternative medicine for decades. It is most noteworthy that now conventional medicine is including intravenous vitamin C as an additional modality for cancer treatments. Most cancers are missing the enzyme catalase. This makes them vulnerable to hydrogen peroxide, which is the breakdown product of intravenous vitamin C. Normal cells have enough catalase to inactivate hydrogen peroxide. Phase II clinical trials are now underway with respect to lung cancer, brain cancer and pancreatic cancer. In conclusion, the idea is to amplify the effects of either radiotherapy or chemotherapy by the use of intravenous vitamin C.