Universal Flu Vaccine Is Being Developed

A new universal flu vaccine is being developed.This universal vaccine will only have to be given once in a lifetime. This is quite different from previous vaccines where every year new vaccines had to be manufactured. Dr. Matthew Miller, Ph.D. from McMaster University, Hamilton/Ont. has invented a vaccine that is directed against the stem of all of the flu viruses. This never changes, contrary to specific flu determinants that change from year to year. Two other universities are co-operating in this research, the Icahn School of Medicine at Mount Sinai in New York, and the University of Chicago.

Dr. M. Miller, Ph.D., assistant professor in the Department of Biochemistry and Biomedical Sciences at McMaster published the original article on Aug. 15, 2016. The story was picked up by the popular press as shown in this link.

The premise of the new vaccine is to develop a vaccine that causes antibody production against the common denominator in the stem of all flu viruses. This is the stem region of the hemagglutinin (HA) glycoprotein. Conventional vaccines concentrated on the head region of the HA glycoprotein. The head region undergoes antigenic drift. Due to this conventional vaccines require yearly updates to continue flu coverage.

At the same time the universal vaccine mobilizes white blood cells to attack the virus/antibody complex. As a result side effects from the vaccine are minimal compared to conventional flu vaccines. White blood cells remove it quickly before inflammatory reactions take place. Such a vaccine has already been tested in ferrets.

More testing is required to perfect this new universal flu vaccine. By involving three universities (one Canadian, and two US universities) the results will be more robust. It is anticipated that in 5 years (around 2021) such a universal flu vaccine should be ready for human use. The shot will be very similar to the present flu vaccine. However, the effect will be lifelong protection from the flu despite changing sub strains. This is probably one of the most significant developments in the world of vaccinations. 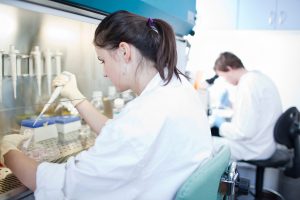 Universal Flu Vaccine Is Being Developed

A universal flu vaccine is being developed that will be effective against all flu strains. This will be effective against all of the past flu strains. In addition it will also prevent pandemic flus in the future. The reason is that all of these flu viruses share the same stem region of the hemagglutinin (HA) glycoprotein. The vaccine also stimulates the white blood cells to fight intruding flu viruses. This way antibody/virus complexes get removed. Animal experiments have already proven their effectiveness with no toxicity. Human trials are not far from being launched by the three universities named earlier.