Before we examine this study I like to give some background about what colony-stimulating factors are. Dr. J.E.Till and E.A. McCulloch did pioneering work in the late 1950’s and early 1960’s in a mouse model when they detected for the first time stem cells in the bone marrow; at the same time they also detected granulocyte-stimulating colony factors (GSCF). These are specific growth factors that stimulate bone marrow stem cells to differentiate into blood cells. Other researchers used the same mouse model and they showed that stimulation with GCSF stimulated three progenitor cell lines in the bone marrow, namely macrophages (cleaning up debris), dendritic cells (antigen presenting cells) and granulocytes (fighting infections). In the meantime recombinant colony-stimulating factor for human use has become available.

Improvement of men with alcoholic hepatitis with GSCF

Now we return to the study from the American Journal of Gastroenterology in September 2014. In this study 46 men with severe alcoholic hepatitis were divided into two groups. 23 received standard medical therapy plus GCSF subcutaneous injections twice per day for 5 days. The other group functioned as the control group receiving standard care only. After 3 months only 5 patients (21.7%) had died in the experimental group, whereas 18 patients (78.3%) had died in the control group. The researchers followed biomarkers in the blood like CD34+ cells, a measure of the immune system that increased as a result of stimulation of the bone marrow by GCSF. In patients who had received GCSF the dendritic cells peaked at day 6 and with subsequent tests, but not in the controls. Similarly, liver enzymes normalized with GCSF indicating a recovery from the hepatitis. 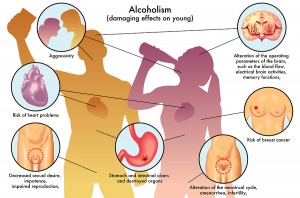 The physician administers GCSF intramuscularly; it is an expensive prescription drug. The best treatment for alcoholic hepatitis is still prevention (cut out all alcoholic drinks). As you see in about 20% of cases administering GCSF was not effective. On the short-term GCSF treatment can improve survival, but ultimately alcoholic hepatitis remains a killer, and this treatment is not necessarily a cure on the long-term, especially if liver damage has gone too far.