In a publication in the Science Daily mid April 2015 eight top nutrients were reviewed that keep your brain young.

This report was based on a review by The Institute of Food Technology by Linda Milo Ohr. Notably, in order to prevent the metabolic changes in brain cells that occur with aging eight nutrients are necessary. The nutrients are found in food, but supplementation is also important.

1. Cocoa contains flavonoids that prevent a part of the brain, called dentate gyrus from degenerating and causing memory problems.

2. It is important to realize that omega-3 fatty acids, which occur in fish, reduce inflammation in the brain. That in turn prevents deterioration of recognition memory, spatial memory and retention of adverse responses.

3. Phosphatylserine (PSP)-a supplement- and phosphatidic acid showed in pilot studies to help with memory, cognitive function and mood in general.

5. Citicoline, another supplement, inactivates free radicals in the brain, which prevents brain cells from dying off.

6. Choline, which is present in dairy, carrots or which can be taken as a supplement, preserves brain cell chemistry and in doing so prevents cognitive decline.

7. Magnesium occurs naturally in green leafy vegetables, avocadoes, bananas and dark chocolate fish, beans and lentils and is part of many biochemical reactions in brain cells and body cells, but was also found to be particularly valuable in the recovery of patients with head concussions.

8. Blueberries are rich in antioxidants and increase neural signaling, which speeds up thought processes.

This list is similar to one presented by Dr. Pamela Smith at the 22nd Annual A4M Las Vegas Conference in mid December 2014. Dr. Pamela Smith said then that people develop Alzheimer’s disease, because they neglect their body and their brain. Neglecting elevated blood pressure by not treating it properly with medication will lead to vascular dementia. Hyperinsulinemia (too much insulin in the blood) from obesity, untreated type 2 diabetes and metabolic syndrome is another mechanism. Lack of exercise is another big factor. In short, lifestyle issues, not genetic factors are what decide in most cases whether or not we develop Alzheimer’s, as we get older. Part of this is also an overconsumption of sugar and starchy foods, which causes hyperinsulinemia. Too much insulin in the brain leads to the overproduction of beta-amyloid proteins that destroy brain cells. 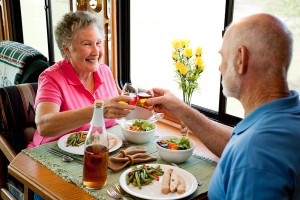 It appears that lifestyle issues decide whether or not we are developing Alzheimer’s. It is important to exercise regularly, eat a healthy diet and take supplements that reduce the risk of Alzheimer’s disease.