There are three kinds of exposures to cigarette smoke.

On March 4, 2020 researchers published their findings about thirdhand smoke. They measured the gas concentration of various cigarette smoke components in a movie theatre before people entered and after they left. With their sensitive measuring devices they were able to demonstrate significant shedding of cigarette smoke from the clothes of smokers. Apart from nicotine there were organic carcinogenic compounds that the researchers could detect with their instruments. The exposure of non-smokers in the movie theatre audience was between one and 10 cigarettes at the end of the movie. Drew Gentner, an associate professor of chemical and environmental engineering at Yale said: “People are substantial carriers of thirdhand smoke contaminants to other environments”.

These poisonous cigarette components stayed in the movie theatre for quite some time. One of the measurements 1 day after the movie performance showed that he air still contained significant amounts of carcinogenic substances. Gentner remarked: “That was the unique part of this study. We were surprised by the wide array of hazardous volatile organic compounds that were off-gassing from the audience including some that are known carcinogens in people, such as benzene and formaldehyde.” The research team measured cigarette pollutants for 4 days after a movie performance in the empty theatre. To start with, nobody had smoked in this theatre for 15 years. There was a significant spike of cigarette smoke components that came into the theatre through clothing and from the skin of smokers. Even after 4 days there were still organic carcinogens in the air of the empty theatre.

Another experiment was to compare the spikes of chemicals during the performance of a general admission rated movie. The values of airborne nicotine and other chemicals were much smaller than during a restricted movie, where older adults were present. Gentner said: “Despite cases where we had audiences of over 200 people for some of the G-rated movies, the pollutants were much larger for R-rated films, even with smaller audiences. Those movies would likely draw older audiences that might be more likely to smoke.” 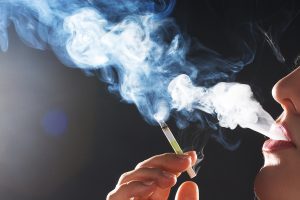 A new study detected that third hand smoke is also dangerous. We all know that first hand and second hand cigarette smoke can cause cancer. Cigarette smoke components are present in the fabric of smokers’ clothes and on their skin. They can become air borne, which causes third hand smoke. A Yale University study has now confirmed that third hand smoke exists. It can be as high as smoking between 1 and 19 cigarettes. This was partly the reason why the hotel and restaurant industry introduced smoking and non-smoking rooms. The Yale researchers said that the next step may well be a complete ban on smoking everywhere. This should also include vaping.