The Biology Of Aging

Until not too long ago scientists considered the biology of aging as a one-way street. Your DNA ages, mitochondria, the cells’ power plants, age and the telomeres get shorter as we age. At the end we run out of steam and die.

Telomeres and the biology of aging

In one study the telomere length at the age of 100 was only 40% compared to the age of 20. Now we are learning that telomeres can be lengthened by healthy lifestyles. It has been shown in humans that increased physical activity elongated telomeres. So did vitamin C, E, vitamin D3 supplementation and resveratrol. A Mediterranean diet and marine omega-3 fatty acid supplementation elongate telomeres as well. In addition higher fiber intake, bioidentical estrogen in women and testosterone in men have been shown to elongate telomeres. Finally, relaxation techniques like yoga and meditation are also elongating telomeres.

Mitochondria and the biology of aging

Mitochondria can be preserved through exercise, CoQ-10 supplementation and caloric restriction. This overcomes a lack of energy and strengthens your muscles including the heart. As Dr. Whitaker has shown in this link, it is simple. Eat less, exercise more and take nutritional supplements.

Hormone deficiency and the biology of aging

Another factor of aging is hormone deficiency in general and growth hormone (GH) deficiency in particular. In the past it was thought that growth hormone was only important for bone growth in children and young teenagers. However, more research revealed that it has also an important maintenance function. This maintenance concerns our muscles including the heart and to preserve our brain. Here is a review article about human growth hormone deficiency that may be mind-blowing to you.  When people age, they lose GH production putting them at a considerable risk to get heart attacks and strokes. But they are also at a higher risk of serious falls due to muscle weakness and balance problems. When the doctor detects low IGF-1 levels in the blood this is a sign of GH deficiency. This has to be confirmed by low GH metabolites in a 24-hour urine sample.

When this is also showing GH deficiency, the time has come to do daily GH injections with human GH. This can be done using a similar pen that is used for insulin injections. The dosage is only between 0.1 mg and 0.3 mg per day, given before bedtime. This is remarkably effective not only for heart attack and stroke prevention, but also to treat muscle weakness. In addition it treats lack of mental clarity and increases general well being. Patients report that their joint and muscle aches disappear. They can engage in physical activities again. But GH is not the only hormone that needs to be observed and when low be replaced by nature-identical hormones. 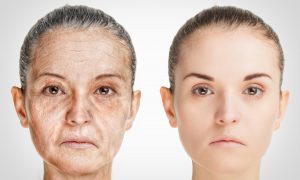 The Biology Of Aging

We have the tools nowadays to postpone aging considerably. The key is to approach this scientifically. Think about your mitochondria (where energy comes from) and your telomeres, because you need healthy DNA. Monitor your hormones, and pay attention to good nutrition and exercise. This provides a healthy framework on which you can build healthy aging.