Teen Marijuana Use Can Cause Bipolar Disease Later

Teen marijuana use can cause bipolar disease later in life. This is what a new study showed. The study comes from the University of Warwick in the United Kingdom. Dr. Steven Marwaha, a clinical academic psychiatrist was the lead investigator. While it had been known that the use of marijuana in teens could cause schizophrenia later in life, it had not been known that marijuana use could trigger bipolar disease also.

The study that showed that teen marijuana use can cause bipolar disease later in life involved 3370 participants. Cannabis use 2 to 3 times per week at the age of 17 showed a significant connection with hypomania symptoms at the age of 22 to 23. The risk of developing hypomania was 2.21-fold. Hypomania is a symptom complex that includes elevated mood, increased activity, decreased need for sleep, grandiosity and racing thoughts. It less severe than mania where symptoms are similar, but are stronger and out of control.

Other causes of marijuana use

These findings were independent of alcohol abuse, of psychotic symptoms or depression late in adolescence. Dr. Marwaha said that male cannabis use was more likely to lead to hypomania symptoms in early adulthood than in females.

The authors pointed out that child abuse has shown a link to the development of bipolar disease. Child abuse could also lead to teenage use of cannabis in an attempt to improve symptoms of anxiety associated with previous child abuse. This in turn can lead to hypomania in early adult life and bipolar illness later.

By attempting to intervene in teenage use of cannabis there is a potential tool to help prevent hypomania and bipolar disease later in life. This is something the mental health care worker needs to be aware of. 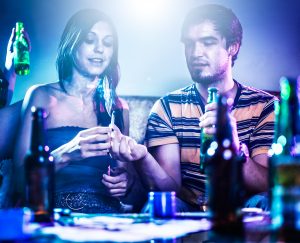 Teen Marijuana Use Can Cause Bipolar Disease Later

A new study from England involving 3370 participants studied teenagers who used marijuana at age 17. There was a risk of 2.21-fold that by the age of 22 to 23 they would develop symptoms of hypomania. Exposure to cannabis was an independent risk factor for developing hypomania. Alcohol abuse, psychotic symptoms or depression late in adolescence had no influence in developing hypomania. Many of the individuals had a history of child abuse and this may have been a triggering factor for them to consume marijuana in their teenage years. The authors suggest that there is a possibility of intervention. Avoiding exposure to cannabis in the teenage years likely could prevent the development of bipolar disease later in life.