At the 2020 Alzheimer Disease Conference the recommendation was to target 12 risk factors throughout life to prevent dementia later.

Right now, there is a divide between poorer countries (low and middle income) where 2/3 of people with dementia live. In contrast, in the US, England and France dementia cases have fallen. This is probably because of improved lifestyle changes. This demonstrates the possibility of changing the statistics of dementia by paying attention to the risk factors.

The following list is based on many studies, which determined that dementia develops following various causal factors. The experts on Alzheimer’s disease published these in the hope that people would change their lifestyles.

Explanation why the dementia risk factors are detrimental to brain function

Keeping the systolic blood pressure below 130 is important to avoid hardening of the arteries with subsequent reduced blood flow to the brain. Preventing hearing loss and re-establishing hearing following hearing loss with hearing aids is important to maintain cognition. Equally important, avoiding social isolation and staying active in later life are tools to keep brain function going without loss of memory. Studies have shown that well educated people maintain brain function the longest and keep their memory as well. For this reason, it is important to provide children with primary and secondary education. Reducing exposure to air pollution and second-hand tobacco smoke as well as to stop smoking prevents cardiovascular deterioration in people. Pollution, however, translates again into reduced blood supply with less oxygen and nutrient delivery to the brain.

Researchers showed that head injuries lead to scarring of brain tissues and shrinkage of the hippocampus where the memory center is located. We have no adequate treatment for that process. The only tool physicians have is to stress the importance to prevent head injuries.

Physical inactivity is associated with the development of dementia. We know that a lack of regular exercise causes low levels of the beneficial subfraction of HDL cholesterol. A lack of HDL cholesterol is a cause for heart attacks and strokes. Increasing HDL with regular exercise prevents them. You can reduce obesity and diabetes by following a Mediterranean diet and by losing weight. This improves blood supply to the brain and prevents dementia. Finally, treating depression improves the outlook on life and prevents suicides. Researchers also showed that treating depression prevents dementia. 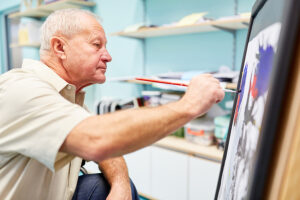 Scientists defined 12 different risk factors for developing dementia. All of these factors are associated with a higher risk to develop dementia. Dementia rates are highest in development countries. Recently statistics in the US, England and France revealed that dementia percentage in the population has significantly decreased. One of the reasons may be that people are now paying more attention to healthier lifestyles. A commission of Alzheimer’s experts recommended that people pay attention to the 12 dementia risk factors mentioned. If they do, there can be a 40% reduction of dementia world-wide. This is not that difficult to do as it involves changes towards healthy lifestyles.

Recommendations to reduce the risk of developing dementia

Recommendations are to stop smoking, to increase your exercise, eating healthy to prevent obesity and diabetes. There is also the recommendation to prevent multiple head injuries and to limit alcohol intake to less than 21 drinks per week. Have an active lifestyle, where you reduce your sitting activities. In addition, avoid social isolation and treat depression. Also, treat your blood pressure (less than 130 for the systolic blood pressure). All children should have primary and secondary education. This leads to higher mental activity until a ripe old age.