A new study revealed that T cells play a major role in ulcerative colitis. In particular, this is an inflammatory disease where ulcerations occur in the large intestine and rectum. To point out, University of California researchers did unique experiments with thousands of single cells from rectal biopsies. Specifically, they used sensitive methods like single cell RNA determination and antigen receptor sequencing to investigate immune cells.

According to the CDC inflammatory bowel disease (IBD) can either manifest itself as ulcerative colitis in the large intestine or as Crohn’s disease in the entire digestive tract. In 2015 about 1.3% of US adults received a diagnosis of IBD. In 1999 only 0.9% of the US had IBD. The symptoms of IBD are weight loss, abdominal pain, persistent diarrhea, rectal bleeding and/or bloody stools and fatigue.

The details of the study were published here. The clinicians did rectal biopsies on 7 patients with ulcerative colitis and 9 rectal biopsies of normal controls. In addition, they also took blood tests. Prof. Gene Yeo from San Diego explained: “We took advantage of a state-of-the-art approach allowing us to generate mRNA and antigen receptor sequencing data from the same single-cells and analyzed thousands of individual cells, which is quite exciting.” Cytotoxic T cells are the lymphocytes that the thymus gland processed. Because of their surface markers T cells also go under the name of CD8+ T-cells.

Ulcerative colitis is an autoimmune disease

The fact that memory T cells could escape from the tissue into the bloodstream is evidence that ulcerative colitis is an autoimmune disease. Dr. Brigid S. Boland, a gastroenterologist at UC San Diego Health and co-author of the paper, said: “This may explain why IBD can affect not just the intestines, but many other parts of the body as well.” In other words, ulcerative colitis begins in the gut with an overproduction of memory T cells (TRM), but ends with generalized symptoms of an autoimmune disease. 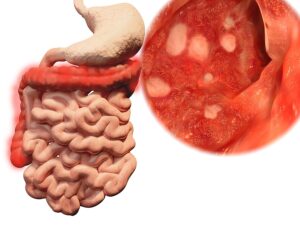 Ulcerative colitis is an inflammatory bowel disease due to an autoimmune disease. It leads to ulcerations in the colon and rectum, which can bleed and be painful. Recently a research team from the University of California described that T cells play a major role in ulcerative colitis. T cells in general also go under the term “cytotoxic cells”. They attack invading viruses and cancer cells. Normally when they have completed their assignment of killing viruses or cancer cells, they recede and only a few memory T cells remain. In ulcerative colitis the opposite occurs. The T memory cells persist and more of them are forming. They are quite aggressive and can destroy the mucosal barrier of the colon and rectum.

The research team hopes that new treatment approaches will help ulcerative colitis patients to solve their problem. Research needs to develop either a vaccine or a drug that reduces the memory T cell population in patients with ulcerative colitis. This is not imminent at this point, but researchers are hopeful to develop this approach.