SuperAgers Who Retain More Of Their Brain Power

Some people in their 80’s and 90’s are SuperAgers who retain more of their brain power than controls. A study showed that brain thickness is regressing much slower in SuperAgers compared to people who age normally.

MRI scans of the brains of SuperAgers depicted that brain aging (measured as brain atrophy) occurred twice as slowly as in aged matched controls. Researchers compared 24 SuperAgers to 12 average elderly people over 18 months. In that time the brains shrunk 2.2% in the average elderly versus 1.1% in the SuperAgers.

Senior researcher Emily Rogalski, PhD said, “part of the reason why they may have different brain volumes is because over the decades they’ve been losing their brain volume at a different rate”. Dr. Ezriel Kornel, a neurologist stated that the SuperAgers had at least in part a genetic advantage. But the other part likely is due to environmental factors.

The following factors are important to prevent premature brain aging.

Dr. Rogalski has done previous research on 80-year old peers and SuperAgers. When she compared brain MRI scans of SuperAgers who retain more of their brain power, the brain cortexes of the SuperAgers were less worn-looking.  They also appeared more like the scans of  people in their 50s or 60s. Dr. Paul Wright, chair of neurology at North Shore University Hospital in Manhasset, N.Y. commented: “Brain shrinkage occurs in the natural progression over time, and when you lose brain volume, you lose function.”

This is a recent publication in the April 4, 2017 edition in the Journal of the American Medical Association. 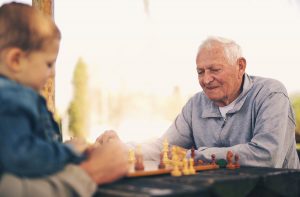 SuperAgers Who Retain More Of Their Brain Power

A comparison  of MRI brain scans between SuperAgers who were mentally fit and the average 80 year-old controls reveals interesting results. Researchers allowed 1½ years to lapse and repeated the brain scans. They found significant changes: SuperAgers who retain more of their brain power lost only half the amount of brain cortex than the controls. One of the researchers pointed out that this delayed aging process likely has been happening all their lives. This could be the reason for the preservation of their thought processes. SuperAgers surf the Internet easily and can lead a conversation about a variety of topics. They are doing volunteer work and they are reading books regularly. The age controls showed signs of slowing down and had memory problems. Dr. Kornel said: “This is the next big frontier in science, to figure out how we can prevent overall deterioration of the brain.”