Sunscreen In The Blood Stream

The results were astounding. It took only one day after application of the chemicals to exceed the safe zone established by the FDA. This was also reported by CNN.

Ideally all of the sunscreen lotions, sprays or creams should stay on the outside of the skin. However, the truth is quite different. Significant amounts of these chemicals that block UV light got absorbed into the blood. Had the amounts stayed under 0.5 ng/ml of blood the FDA would have accepted this as acceptable. However, the concentrations for all of the sunscreen agents exceeded this threshold significantly. The FDA will demand additional clinical trials and evidence from studies that the manufacturers may have on file to establish or rule out toxicity of these drugs. 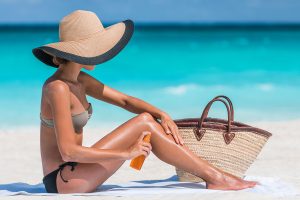 Sunscreen In The Blood Stream

The four major components of a number of sunscreen lotions, sprays and creams have exceeded safe levels in a pilot study. Researchers tested the applications of the sunscreens deliberately to the maximum for the day. Still, there was no expectation  of such high blood levels documenting absorption of all these agents into the blood. The FDA said at this point that nobody should change their application practices until they have further studies to analyze. Zinc oxide and titanium dioxide were in the safe and effective zone. However, the majority of the remaining sunscreen agents will undergo a safety review.