Sugary Drinks And Drinks With Sweeteners Cause Disease

Details of the JAMA study

451,743 subjects were included in the study. The observation time was about 18 years and 41, 693 deaths occurred. People consuming 2 soft drinks per day had the highest mortality rate compared to people who consumed only 1 soft drink per month. All-cause mortality of people consuming sugar soft drinks was 8% with consumption of 2 or more glasses per day. For artificially sweetened soft drinks the all-cause mortality was 26% for the consumption of 2 or more glasses per day. The risk of dying from a heart attack with consumption of sugary drinks was 52%. The assumption is that the person was consuming 2 glasses per day, in comparison to 1 glass per month. The risk of dying from a digestive disease was even higher, namely 59%. And the trigger for this was drinking only 1 or more drinks of artificially sweetened soft drinks versus 1 drink per month.

This study has an enormous statistical power due to the numbers of participants (451,743 subjects) and the length of observation (18 years). There was no detectable cancer risk from soft drinks on cancer occurrence. But there was a risk of 1.59-fold to develop Parkinson’s disease. It only took 1 drink or more of either sugar or artificial sweetener containing soft drinks per day.

Sugar-containing soft drinks were found to cause digestive diseases. The authors pointed out that sugar may alter the gut barrier. This leads to an increased risk of an enteric infection. Another factor for developing digestive disease is the fact that many soft drinks contain fructose. Fructose causes fatty infiltration (lipogenesis) of the liver. This can lead to non-alcoholic fatty liver disease and a lower insulin sensitivity. 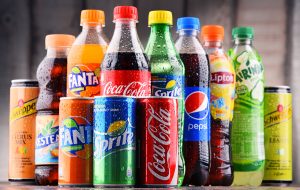 Sugary Drinks And Drinks With Sweeteners Cause Disease

This is the first study to show a connection between soft drink consumption and the development of Parkinson’s disease. This study has an enormous statistical power due to the numbers of participants (451,743 subjects) and the length of observation (18 years). The study reconfirmed that the consumption of soft drinks increases mortality among their consumers, which other researchers have also found in the past. But it may be because of the statistical strength that sugar containing soft drinks cause mortality from digestive causes.

On the other hand, artificial sweeteners cause mortality from heart attacks. At this point it is not entirely clear why this is the case. But sugar may be causing dysbiosis in the gut with subsequent inflammation and leaky gut. This can also cause fatty infiltration of the liver. Eventually this leads to liver cirrhosis and death from liver failure. Why artificial sweeteners do cause heart attacks remains a question which future research has to find the answer for. In comparison, stevia is a plant sweetener, which does not show a cardiovascular risk, nor does it impact the health of the digestive system.