This article is about the fact that stem cells help stroke victims. A pilot study about helping stroke victims with stem cells was published in August 2014.  The work came from a research group from Imperial College London. These doctors took 5 patients that had suffered serious stokes and harvested their bone marrow stem cells (utilizing the marker CD34+ to select for pluripotent stem cells).

The patients’ own stem cells were injected into arteries that supply the brain. All 5 patients improved in the next 6 months. The difference in this study from other similar studies in the past was the fact that the patients were treated within 7 days of the stroke before permanent scarring had set in. In other studies in the past stroke patients were treated 6 months or even later following their stroke and improvements were disappointing.

Without timely treatment with stem cells the survival rate after serious strokes is no more than 4 %. In this promising study 4 of the 5 patients (80%) who all had the most severe type of stroke were living independently on their own after 6 months following their stem cell treatment and rehabilitation. 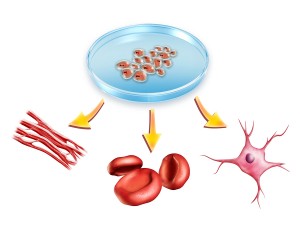 It is thought that growth factors released near the injured brain were responsible for the miraculous recovery.

Dr Soma Banerjee, the lead author of the study said that the purpose of this study was to show that it is feasible to treat stroke patients early when it is expected that the stem cell therapy would be more effective. When treatment is started late the scar tissue is in the way of a recovery explaining the poor results of similar approaches long after the stroke had occurred. Dr Paul Bentley, another lead author of this study added that the group had for the first time shown that it is possible to isolate stem cells from the bone marrow and that they can be injected directly into brain arteries (not just via intravenous injection). The group is now developing sensitive brain scanning techniques to follow the stem cells when they are doing their repair work.