A multicenter, phase II trial from Genova, Italy has been completed on 21 patients with severe multiple sclerosis (MS), published in March, 2015.

These were patients whose MS was not under control despite conventional MS treatments. They developed new brain lesions that MRI scans clearly showed. In the first phase of the trial all participants received intense immunosuppressant therapy to suppress the autoimmune cells of the immune system. In the second phase 12 patients received mitoxantrone, a standard chemotherapeutic agent used conventionally for complicated MS cases.

The other 9 patients had bone marrow samples removed. When the research team determined that there was full suppression of the immune system, the physicians transplanted the MS patients’ own bone marrow to restore their hematopoietic cells in the bone marrow.

As the next step of the study physicians observed both groups of patients for 4 years. At the end the researchers ordered MRI scans of the brain of all participants. The stem cell group had 79% fewer brain lesion than the mitoxantrone group. On average there were 2.5 brain lesions per patient in the stem cell group over 4 years while the control group on mitoxantrone developed 8 lesions on average.

Stem cells can profoundly affect the course of the disease

However, the multidisciplinary researchers analyzed other parameters of disease severity. The main study author, Dr. Giovanni Mancardi said: “This process appears to reset the immune system.” And he added: “With these results, we can speculate that stem cell treatment may profoundly affect the course of the disease.”

There were serious side effects with the stem cell group. Unfortunately the publication did not provide details of these side effects. But each case settled and no long-term effect from the side effects remained. Dr. Mancardi mentioned that they expected these adverse events, but the clinicians were able to resolve them without permanent consequences.

All patients of the trial were using canes and crutches to cope with their disabilities since an average age of 36 years prior to entering the trial. There was no difference with regard to the progression of disability between the two groups. Whatever neurological lesion caused disability likely was due to scarring, which the researchers did not expect to resolve with stem cell treatment. 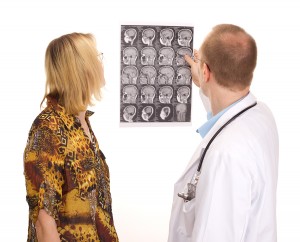 At this point this is an interesting new approach to severe forms of MS that are extremely difficult to treat. However, we need to wait for the completion of a phase III trial with more patients before a general recommendation as a standard therapy. Also, one wonders whether the bone marrow, which presently is given intravenously should not be partially given intrathecally (into the space where the cerebrospinal fluid envelops the spinal cord and the brain). This approach may suppress brain lesions and spinal lesions even more. The stem cell literature seems to indicate to me that stem cells need to be brought as closely as possible to the area that is problematical. This is not a therapy that should be taken lightly! The stem cell treatment is not the problem, but the pre-treatment chemotherapy  can have serious consequences.