In order to achieve higher language skills 10 years into the future, parents should start language development early with their toddlers. This is, above all, what a study from Pediatrics showed.

First of all, the researchers took audio recordings of the interaction between parents and children in intervals. Furthermore, they analyzed these studies using an automatic computer program. Finally, the study continued for 10 years. They found that the critical time for exposure to the adult spoken word is between 18 and 24 months. If during that time there is good interaction between adults and children, language development of the child receives a boost that lasts for a decade. Children who do well between the ages of 18 and 24 months will do excellent at the ages of 9 to 14.

More about the long-term study

The key is the child’s exposure to the adult spoken word. At a younger age bedtime stories from a storybook are important. When the child plays with building blocks the adult may want to ask what the child is building. Whatever the child answers determines what the next question of the adult will be. It is the interplay of words what drives progress of the child’s language and comprehensive listening skills.

One finding was that frequent chatting with a toddler accounted for 27% higher rating in verbal comprehension 1 decade later. The time of 18 to 24 months is called the “language explosion”. This toddler age group is particularly vulnerable when they are not getting enough stimulation with verbal interplay between the parents and the child.

The details of the study were rather complicated and technical. Expressions like “adult word count”, “conversational turn count”, and “child vocalization”, “Expressive Vocabulary Test”, “Language Environment Analysis” are common. The researchers also used: “Peabody Picture Vocabulary Test”, “socioeconomic status”, “Verbal Comprehension Index” and “Wechsler Intelligence Scale for Children”. Essentially the researchers assessed the language skills at the baseline of 18 to 24 months. They evaluated the children again at age 9 to 14 years with language and cognitive tests.

The above link is the original research paper. This link has translated the findings into easier language. 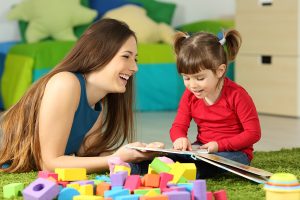 This publication from the LENA Foundation, Boulder, Colorado brought to light an important finding. Exposure to adult language during the toddler period of 18 to 24 months is the foundation of language development. It determines how a child will develop academically 10 years later! The brain needs language stimulation to develop optimally. Dr. Gilkerson, the lead researcher of the study said: “We were expecting to see correlations based on the previous research with younger children, but can’t help but be astounded that automated language measures collected at 18 months can predict anything 10 years later. It is nothing short of remarkable, in my opinion.”

The message is simple: talk to your toddler! Television and other electronic devices are not showing these results. You are your child’s first teacher.