Some Artificial Sweeteners Cause Cancer

A large study on humans showed after almost 8 years that some artificial sweeteners cause cancer. Notably,  102,865 patients were followed over 7.8 years.

Here are the results

It is important to realize that most of the sweeteners that are in use in the beverage industry contain the artificial sweeteners aspartame and acesulfame-K. The original publication regarding this research came out on March 24, 2022. In fact, the researchers analyzed the dietary intake and consumption of sweeteners using a 24-hour dietary record. Surprisingly, with aspartame there was a 15% general association with cancer development. In addition, there was an association between acesulfame-K and cancer development of 13%. Finally, there was a 22% association with regard to aspartame and breast cancer, which was a new finding. Aspartame also was associated to 15% with obesity-related cancers. All sweeteners together had an association of 15% with various cancers.

The lead author and Ph.D. candidate Charlotte Debras said: “What we can say is that, in this study, higher consumers of artificial sweeteners, above the median intake of 18 mg/d and for which average intake was 79.43 mg/d, had a significantly increased cancer risk compared to non-consumers.“ But it is also important to note that only aspartame and acesulfame-K had the 13% to 15% risk of causing cancer. Other artificial sweeteners did not have this effect. These other sweeteners were: Advantame, Cyclamate, Neotame (brand name Newtame), Saccharin (Sweet’N Low or Sweet Twin) and Sucralose (Splenda).

These other artificial sweeteners have the following potential health problems: Sucralose can cause migraines, agitation, numbness, dizziness, diarrhea, swelling, muscle aches, stomach and intestinal cramps and bladder problems. Cyclamate caused chromosomal breaks in sperm of rats and bladder tumors, also in rats. But there is one exception: the plant-derived natural sweetener, Stevia does not cause any side-effects. It is for this reason that I take Stevia extract into my coffee. The natural sweetener from Monk fruit also has no undesirable consequences. Monk fruit is safe for pregnant women and for children. 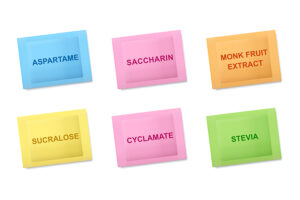 Some Artificial Sweeteners Cause Cancer

A recent study on a large number of patients and lasting for almost 8 years established that aspartame and acesulfame-K are not safe as they can be the cause of an increased cancer risk between 13% and 15%. In my review of sweeteners, I found that the safest sweetener is Stevia, a plant-derived sweetener. It has no side effects and definitely does no cause cancer. Monk Fruit sweeteners also have no undesirable side effects. It always makes sense to err on the safe side when you ingest anything.