A pilot study found that there was a shorter hospital stay with vitamin D treatments compared to a placebo group. The Journal of Clinical and Translational Endocrinology published this paper in June of 2016.

Critically ill patients on mechanical ventilation received high doses of vitamin D3. They recovered faster and had shorter hospital stays than those patients who received placebos.

31 intensive care unit patients on mechanical ventilation were randomized to get 50,000 IU or 100,000 IU of vitamin D3 per day for 5 days. In the beginning of the study 13 subjects had 25-hydroxyvitamin D levels that were below 20 ng/ml. This is considered to be deficient for vitamin D.

The average hospital stay was as follows for the various groups:

These high doses of vitamin D3 were needed, because these sick ICU patients were in acute need of building up their vitamin D levels.

The authors pointed out that there are possibly various factors that have contributed to the shorter hospital stay on higher doses of vitamin D3. Vitamin D3 may have improved respiratory and other skeletal muscle function. On the other hand vitamin D may have modified the inflammatory milieu. Finally, the immune system may have received a significant boost from vitamin D. The main point is that there was a shorter hospital stay with vitamin D treatment of these patients.

The same authors published a follow-up publication in November of 2016. Here they showed that in the high dose group of vitamin D treated patients the hemoglobin levels came up from previously anemic levels.

At the same time the investigators had measured hepcidin levels. They fell in the high dose group, but not in the lower dose group. Hepcidin is a protein necessary for iron transport and absorption from the gut. When it is too high it is causing anemia.

This suggested to the authors that vitamin D seems to be involved in normalizing the iron metabolism. This in turn helps to treat anemia associated with chronic disease. 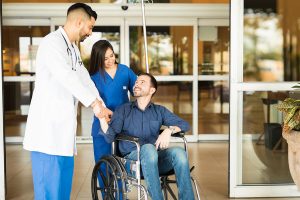 The high vitamin D treatment group (100,000 IU per day) in this study showed the following. It allowed intubated patients with mechanical ventilation to be discharged from the hospital in a much shorter time. This was clear when compared to placebo treated patients. The authors did a subsequent publication. In it  the same high vitamin D patient group increased their hemoglobin levels (anemia disappeared). At the same time the iron transport protein hepcidin, which was too high before came down to normal levels. The key is to keep vitamin D levels within the normal range all the time.

If you take this supplement, do not just pop capsules! Get a blood test whether you are deficient or not, supplement accordingly, and you have a recipe for better health. This will hopefully help you to prevent an admission to the ICU.