Sarcopenia In Elderly Can Be Treated

New research from McMaster University, Hamilton/Ont. showed that sarcopenia in elderly can be treated. Sarcopenia is the condition where muscle mass and strength fade away with age. It is particularly common in seniors, a growing portion of the population worldwide.

Sarcopenia may be the reason why an older person can suddenly not get up from a chair or move up or down the stairs.

McMaster University in Hamilton/Ont. conducted a clinical trial  where a study group of at least 70 year old or older people with sarcopenia received a supplementation of whey protein, fish oil, calcium, vitamin D and creatine.

The control group only received a placebo supplement.

Further details regarding the study on treating  sarcopenia in elderly patients.

The initial 6 weeks of supplementation showed that the muscle bulk of the experimental group was increasing. The control group showed no increase of muscle mass.

The authors concluded that a multi-ingredient nutritional supplement could increase both muscle mass and muscle strength, particularly in conjunction with an isometric exercise program. 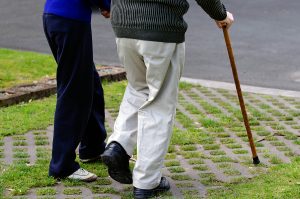 Sarcopenia In Elderly Can Be Treated

In the past the general opinion was that aging would lead to sarcopenia, and there was no effective treatment available. Based on the data of the clinical trial this viewpoint needs revision. Sarcopenia in older people is indeed treatable. But for best results a combination of supplements and a specific exercise program are necessary. Older people no longer have to have problems getting up from a chair or having falls due to a lack of muscle strength. The key is preventing this through a combination of supplements and muscle strengthening exercises.