Risk Versus Benefit of Aspirin (ASA)

A meta-analysis involving 164,225 participants from 13 trials appeared in JAMA re-examining the risk versus benefit of Aspirin (ASA).

The study was published January 22, 2019. The average age of the participants was 62 years. There were 19% diabetics among them. The average risk to develop a heart attack or stroke was 9.2%. Aspirin use reduced the risk of developing another heart attack or stroke by 11%. With ASA the recurrence of a cardiovascular event was 57.1 per 10,000 participant-years. This compares to 61.4 per 10,000 participant years without ASA. The number of patients needed to treat was 265.

The downsides of ASA treatment were gastrointestinal bleeding and bleeding in the brain (hemorrhagic stroke). 23.1 per 10,000 participant years had bleeds with ASA prophylaxis. In contrast, there were 16.4 bleeds per 10,000 participant years without any ASA. The number needed to get one gastrointestinal bleed was 210. Scientists call that the “number needed to harm”.

Conclusion of the scientific panel

The numbers needed to treat (NNT) gives a measurement how effective a therapy is. Conventionally a drug is considered to be effective, if the NNT is less than 50. However, the protective effect of ASA on repeat heart attacks and strokes had an NNT of 265. This is much higher than 50. By the same token, the harmful effects of ASA regarding bleeding ulcers and bleeding in the brain had an NNT of 210. This is well in excess of 50 as well.

Using the methods of evidence-based medicine the conclusion is that ASA is not very effective in preventing heart attacks and strokes. But ASA is not that harmful: it takes 210 patients to take ASA before a serious bleed either into the stomach or in the brain occurs. 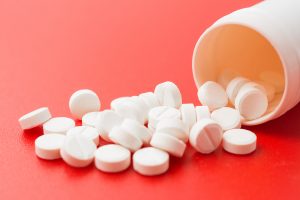 Risk Versus Benefit of Aspirin (ASA)

For years there has been the discussion whether ASA would be beneficial for cardiovascular patients or harmful because of bleeding side effects. When one looks at the numbers needed to treat from evidence-based medicine, it looks that both effects are poor. The NNT for the protective effect of ASA was 265, well in excess of 50, which is the cut-off point. On the other hand the harmful effect of bleeding into the stomach or in the brain has an NNT of 210, which is in excess of 50 as well.

My conclusion is that the patients would be better off to stop ASA. This way there is no serious bleeding as a side effect. The protective effect for those who had heart attacks or strokes was not that impressive anyways, so it would be best to stop the ASA as well. It does not make sense to subject patients who already had a heart attack or a stroke to the risk of a serious hemorrhage either in the stomach or in the brain. In this case a small pill just adds another potential health problem!