Recently CNN reported that researchers determined why Amish children died prematurely. 15 years ago, a child of an Amish family in the eastern US died while running and playing around. A few months later another one of their children died. And 6 years and 8 years later they lost yet another child. After the second child had died the medical examiner contacted researchers at the Mayo Clinic. The Mayo Clinic’s department Windland Smith Rice Sudden Death Genomics had the tools to check out cases like these. This was in 2004. The researchers looked for genetic duplications of a gene that controls the heart rate. But with the 2004 technology the methods were not sensitive enough to pinpoint the cause of the sudden deaths in these children.

There were other pediatric cardiologists from other parts of the US who reported sudden deaths in Amish children. Researchers of the previously mentioned research institute started looking at this problem again. New research looked at sequences of base pairs in two alleles of the genetic locus where heart rhythm is controlled.

The new findings were published in Cardiology JAMA on Jan. 8, 2020. The researchers found identical genetic mutations at the genetic locus that controls the heart rate. The term for the genetic location is RYR2. There were 26,000 base pairs as part of a genetic mutation that were found in four siblings of a family. The problem with Amish families is that they often marry close relatives who also carry similar mutations. This can lead to what researchers call “homozygous duplications”. If this affects the RYR2 gene, which controls for heart rate and heart irregularities it can cause sudden death with exercise.

Ramifications of these new findings

In Amish families marriage between relatives is common. Even if these are distant relatives, they will have some common ancestors. This can result in an accumulation of several mutations. A particularly dangerous mutation, which leads to sudden death with exercise has been subject of this article. Amish young adults who want to marry should undergo a genetic blood test to rule out some of the more serious mutations. This requires that both marital partners have a genetic examination to rule out mutations on the same gene (homozygous mutation). In the case of the RYR2 mutation this can lead to sudden death with exercise.

There is an alternative to treat this with an implantable cardioverter defibrillator. It is an expensive medical device that will restart the heart to beat when it has stopped beating. 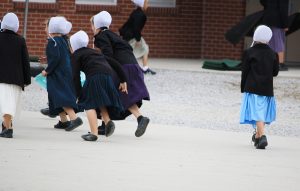 Multiple sudden deaths from heart irregularities in Amish children have led to genetic investigations about the causes. Researchers found a duplication of identical genetic mutations, which explain the deaths. As Amish people often engage in marriage between relatives -even if they seem to be distant relatives-, these mutations can affect a person because of a common ancestor in both the husband and the wife. Researchers at a Mayo Clinic research facility developed genetic tests which couples can take before marriage. Alternatively, a child who has two copies of the gene can be treated with an implantable cardioverter defibrillator. It is important to educate people to avoid intermarriage between relatives in order to avoid the accumulation of the same mutations in their offspring.