Phthalates Are Wrapped Into Your Hamburger

Did you know that phthalates are wrapped into your hamburger? A study has measured phthalates in wrapping material of fast food. It noted that a significant amount of these endocrine disruptors are part of wrapped take-out food. It had bled from the wrapping material into the food. In contrast, homemade food did not have that problem. Researchers from the George Washington University analyzed the food people consumed. There was a big difference in the phthalate content of wrapped fast food versus food that people had prepared and eaten at home. The researchers could further pin it down to the wrapping material of fast food outlets.

Why are phthalates toxic to humans?

Research has pointed out for some time that phthalates are endocrine disruptors. They interfere with sperm production in the male.

Females need to be concerned about phthalates as well as phthalates have toxic effects on the reproductive system.

Phthalates behave like a modified estrogen in the body that blocks the body’s own estrogen activity.  Exposure to phthalates has a link to infertility in both men and women.

The researchers used data from the National Health and Nutrition Examination Survey (NHANES) between 2005 and 2014. 10,253 participants answered questions, where their food came from in the last 24 hours and what exactly they ate. The participants also provided urine samples. 61% of the participants had reported that they were dining out the previous day. The following results came up:

Comment by one of the co-workers of the study

“Preparing food at home may represent a win-win for consumers,” adds Zota, a co-worker of the study. “Home cooked meals can be a good way to reduce sugar, unhealthy fats and salt. And this study suggests it may not have as many harmful phthalates as a restaurant meal.” 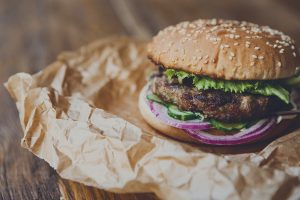 Phthalates Are Wrapped Into Your Hamburger

This phthalate study showed that the more we eat out and the more fast foods we eat, the more phthalates enter our bodies. Phthalates are insidious endocrine disruptors that interfere with fertility in both sexes. Some studies even showed a correlation with testicular cancer in those males with high phthalate exposure. It is best to shop for your own food and eat it at home on proper porcelain plates. Avoid food wrappings containing phthalates. Healthy eating starts at home and healthy eating is what should continue at home! You do not only control the ingredients of your meal; you’ll avoid toxins as well.