Personality Traits Determine whether or not You Get Dementia

A new study showed that personality traits determine whether or not you get dementia or Alzheimer’s disease. Almost 2000 subjects from the Rush Memory and Aging Project, which followed adults from the Chicago area, were examined. The study started in 1997. Notably, the researchers tested three personality traits and followed the subjects for several years.

Personality traits determine whether or not you get dementia

It is important to realize that the researchers noted that a low score in neuroticism allowed subjects to delay the onset of mild cognitive impairment. The lead author of the study was Tomiko Yoneda, a psychology postdoctoral student at the University of Victoria in Canada. Specifically, she said that every 7 points on the neuroticism scale “has an association with a 12% increased risk to develop low grade dementia”. That is to say, overall it caused a loss of 1 year due to premature onset of dementia.

Yoneda pointed out that a 6-point higher score on the conscientiousness scale translated into a 22% lower risk to develop mild cognitive impairment. For an 80-year-old person with a high conscientiousness score this means an extra 2 years of life without developing dementia.

Being an extrovert and socially engaged

2021 publication researchers found that people with higher openness and conscientiousness scorings, and scorings lower in neuroticism, preserved their cognitive functions much better than controls with higher ratings of neuroticism and lower socialization. This confirms the University of Victoria findings. 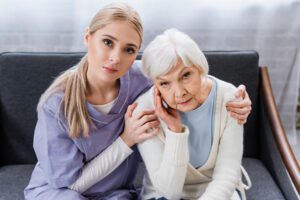 Personality Traits Determine whether or not you Get Dementia

Several lines of research confirm that personality traits determine whether you develop dementia earlier or later. Neuroticism was one of the traits that accelerated the onset of dementia. Conscientiousness also is one of the personality traits that postponed the onset of mild cognitive impairment. When a person is not an extrovert, is socially isolated and has less openness, this person will develop dementia earlier. Social intervention and counseling may be useful tools to postpone dementia, something that so far was not considered to be possible.