New earwax cleaning guidelines have been published on Jan. 3, 2017. They replace the older guidelines dated 2008. There is not much change between the old and the new guidelines. You may have the temptation to use a Q-tip and remove wax from the ear canal. The problem is that you could injure the soft skin inside the ear canal and get a roaring infection or even an abscess. The authors of the guidelines were an advisory panel of the American Academy of Otolaryngology-Head and Neck Surgery.

The purpose of earwax

Earwax keeps our ear canals lubricated and clean. Any dirt or dust that enters the ear canal gets stuck in the wax. This prevents it to go further inside the ear canal. When we talk or chew, the jaw motions move the earwax slowly to the outside. The lining of the ear canal slowly grows from the inside to the outside. This way the wax is removes itself. Sometimes the hardened and dried up earwax forms a pellet that falls out. At other times the water from a shower can wash it off similarly when when you are bathing.

When earwax closes off the ear canal, you have impaction from earwax. Here are the “do’s and don’ts” regarding what you could do about it.

Let’s assume you lose hearing or have ringing (tinnitus) in one ear. The earwax cleaning guidelines tell you not to poke around with various tools, but instead seek medical advice. If you have ear pain, drainage from the ear canal or bleeding, these are not symptoms of earwax and must be assessed by a health professional. You probably have a middle ear infection or you may have perforated your eardrum.

Don’t clean your ear canals, see a doctor instead

Don’t clean your ear canals. This could cause an ear canal infection, called otitis externa. The earwax cleaning guidelines tell you not to use cotton swabs, hair pins, toothpicks or car keys. As tempting as it is, it could cause a serious eardrum perforation and dislocation of the hearing bones. As a result, damages like this require surgical attention later, but this may not restore all of your hearing. For hearing aid users: don’t clean your devices as instructed by the manufacturer and the audiologist. Leave your ear canals alone. The guidelines cover this topic in detail. 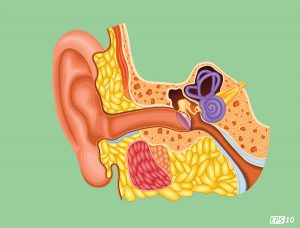