They published a recent study where they showed that a protein from brain cells appears first in cerebrospinal fluid of Alzheimer’s patients. But later it leaks into the blood and can be of use to predict that Alzheimer’s will occur later.

This protein has the obscure name “neurofilament light chain (NfL)”. Damaged brain cells release the substance and it leaks into the cerebrospinal fluid and subsequently into the blood. Patients were reluctant to have an invasive spinal puncture to obtain cerebrospinal fluid. But now that we know that blood tests are just as sensitive, it is easy to have the NfL blood tests as part of a work-up in a neurological clinic.

The use of neurofilament light chain protein

The detection of NfL is a new landmark finding in the quest to diagnose Alzheimer’s early. This study came out of an examination of dominantly inherited Alzheimer’s families.

In 187 patients cerebrospinal fluid was tested and in 405 patients serum blood tests were performed. The tests were correlated with one another. The height of the serum NfL level correlated with mutation carriers versus non-mutation carriers. Also, the NfL blood tests peaked when participants progressed from the pre-symptomatic to the symptomatic stage. In addition there was a correlation between the blood test and cortical thinning (brain atrophy). This was depicted using MRI scans of the brain. Other Alzheimer tests used a mini-mental state examination and logical memory tests. These tests also correlated with the NfL blood test. The worse the test, the higher the NfL levels.

The authors concluded that the dynamic NfL blood test findings were accurate in documenting Alzheimer’s disease progression. They also detected brain neurodegeneration at an early stage, long before clinical symptoms were apparent. 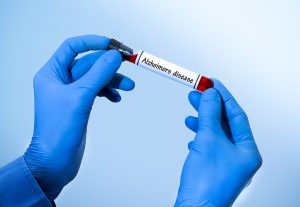 A new blood tests measuring neurofilament light chain protein (NfL) proved to be very accurate in predicting whether familial Alzheimer’s will get expressed or not. The test could predict whether the participants were mutation carriers versus non-mutation carriers of dominant Alzheimer’s disease. The test predicted the presence of Alzheimer’s 10 years before it became clinically manifest. In addition there was a correlation between the blood test and cortical thinning (brain atrophy). MRI scans depicted these findings. Other Alzheimer tests used a mini-mental state examination and logical memory tests. These tests also correlated with the NfL blood test. The authors think that the NfL blood test will be a useful diagnostic tool for a neurologist who deals with Alzheimer’s patients.