Researchers have detected a natural immune-boosting STING protein against cancer. STING stands for STimulator of INterferon Genes. Scientists at Scripps Research have found this molecule that is part of the immune system. It is essential for mounting an immune response against viruses and cancer cells. However, the molecules that activate STING are unstable molecules that get eliminated fast in the bloodstream. Researchers looked for hardier molecules that activate STING for longer. In this publication in Science on August 20, 2020 scientists described several structurally different molecules that they found to be strong activators of STING.

The researchers at Scripps found that their STING-activator, which they called SR-717 cured mice of a very aggressive melanoma skin cancer. They could show that SR-717 and the natural activator bound to the same site on STING and that they both caused the same shape-change in the STING protein. Certain viruses and certain bacteria can activate the stimulator of the STING protein. This activates the immune genes of the innate immune system. They also stimulate the production of type I interferons and other cytokines. This protects uninfected cells and stimulates the adaptive immune responses.

Scripps researchers investigated the effect of SR-717 in a mouse model. SR-717 suppressed an aggressive melanoma cancer in several ways. It inhibited tumor growth and stopped the development of metastases. SRS-717 also furthered the presentation of cancer material to the immune cells. In addition, it also stimulated cytotoxic T cells (= CD8+ T cells) and natural killer cells (=NK cells) to surround the cancer. At the effective dosage there was no evidence of any significant side effect. Researchers are continuing their work in order to develop this into a new cancer remedy for human cancers. 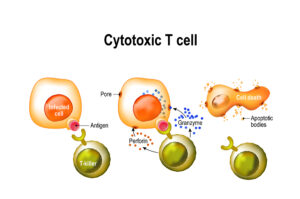 Many new cancer therapies have been promised and have failed to help humans. As a result, we must be cautious that we do not expect too much of the news story that was released by the Scripps Research Center on August 20, 2020. Scientists detected a natural immune-boosting STING protein against cancer. STING stands for STimulator of INterferon Genes. The new STING stimulator is termed SRS-717 and stays in the system for longer than the natural stimulator. The good news is that in a mouse model SRS-717 suppressed an aggressive melanoma cancer. But in the past not all new cancer therapies translated well to humans. We therefore need to be cautious and await clinical trials with various cancer patients. Future FDA approval also depends on a positive outcome of clinical cancer trials with SRS-717. The good part is that the STING stimulator has been non-toxic in a mouse model.