According to a study published in the journal Cell on October 18, 2022 mosquitoes like some more than others.

Experiment showing that mosquitoes like some more than others

Over the course of 3 years 64 volunteers were wearing nylon stockings on their arms for 6 hours a day on multiple days. Two stockings were selected at a time and put into an acrylic glass container. Researchers observed which of the stockings attracted more of the yellow fever transmitting stinging insects. They have the name Aedes aegypti. The researchers could now label the persons whose Nylon stockings attracted a lot of mosquitoes as “mosquito magnets” and others who did not as “low attractors”. The researchers went on to test the skin surface of the volunteers for various chemicals released by the sweat glands.

Carboxylic acid is the key to understand why mosquitoes get attracted

When researchers examined the skin of the mosquito magnets, they found that they had about 50 chemicals in common that attracted the mosquitoes. One of the main compounds attracting mosquitoes was a chemical with the name carboxylic acid. Low attractors had low levels of carboxylic acid in their sweat. The key to understanding why some people attract mosquitos more than others is the chemical composition of sebum, the oily substance of the sweat glands that keeps our skin moisturized.

One of the volunteers was 100 times more attractive to mosquitoes compared to other participants. But high carboxylic acid content in the sweat is only one triggering factor for the Aedes aegypti mosquito to choose its victim. Other factors are skin temperature and carbon dioxide content of the air we breathe out.

Scientists still don’t know why some people produce a lot of carboxylic acid in their skin, while others do not. Some dermatological products may reduce carboxylic acid, but this is still an area of research. Matthew DeGennaro, an associate professor at Florida International University specializes in the neurogenetics of mosquitoes. There was no involvement of him in this research paper. He said: “This study clearly shows that these acids are important. Now, how the mosquitoes perceive these carboxylic acids is interesting because these particular chemicals are really heavy, so they’re hard to smell at a distance.” He went on to say: “It could be that these chemicals are being altered by, let’s say the skin microbiome, and it causes a certain kind of odor plume. Or it could be that other factors in the environment break down these chemicals a little bit, so they’re easier for mosquitoes to detect.” 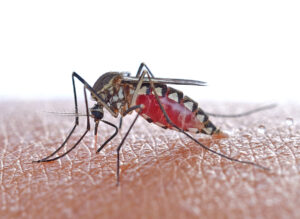 New research showed that some people attract mosquitoes (“mosquito magnets”) while others do not (“low attractors”). The researchers studied the skin excretions of the “mosquito magnets” and found 50 different substances that attracted mosquitoes. However, the strongest chemical substance among them was carboxylic acids, which was the common denominator among the mosquito magnets. Researchers need to provide a solution to reduce carboxylic acid secretion in mosquito magnets. For now we just know why mosquitoes sting some people while they leave others alone. For anybody it is best to avoid any guesswork and use mosquito repellant. This is especially important in the tropics, where Dengue Fever, Zika or Yellow Fever are common.