The results of two studies are in the New England Journal of Medicine to compare the risk of dying after these two procedures.

Details about the study

About half of 2,461 early stage cervical cancer patients received two types of surgery. Either a minimal invasive radical surgery was used to treat their cancer; the other half had an open radical hysterectomy. The researchers followed their patients for 4 years and calculated their survival data. 94 patients from the minimally invasive group died in the first 4 years. This translated into a risk of 9.1% of dying. 70 patients of the open surgery group died in the first 4 years following surgery, which was a 5.3% risk of death.

Details about survival with minimally invasive surgery versus open surgery 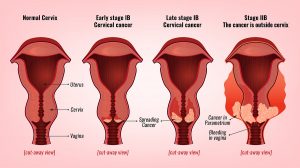 The authors of these studies showed that the outcome was much better among patients who had the traditional open radical hysterectomy with removal of pelvic lymph nodes. Over 4.5 years there was a 10.5% survival advantage with traditional open radical hysterectomies. These are facts that women with early cervical cancer should know. They should discuss this with their physician and specialist. There may be less intraoperative blood loss for the minimally invasive procedures. The newer methods have a shorter hospital stay and less postoperative complications. However, the long-term survival rates are in favor of the traditional open radical hysterectomy. It clearly shows a longer disease-free survival rate, the rate of recurrence is lower, and the overall survival rate is longer than the statistics for the minimally invasive surgery. Sometimes newer methods seem to appear more promising, but in this case the traditional method wins giving the patient a better chance!