Mediterranean Diet Prevents the Decrease of Cognitive Function with Age

A new study found that a Mediterranean diet prevents the decrease of cognitive function with age. A medical journal (Alzheimer’s and Dementia) published the results. Accordingly, this medical news story was reviewed here. Two studies on Age-Related Eye Disease Study (AREDS) and a follow-up study (AREDS2) were the basis for analyzing the effect of nutritional changes on cognitive functioning.

Findings of the Mediterranean diet on cognitive functioning

Researchers found regarding patients who adhered most to a Mediterranean diet:

In a study from 2017 conducted by the National Institutes of Bethesda, Maryland a Mediterranean diet showed several health benefits. This diet reduces cardiovascular diseases and also inflammatory bowel disease, diabetes, breast cancer, bowel cancer and neurodegenerative diseases. It was the reduction of cognitive decline by the Mediterranean diet that triggered the analysis of the AREDS and AREDS2 studies. 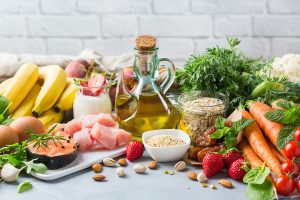 Mediterranean Diet Prevents the Decrease of Cognitive Function with Age