As you prepare for summer BBQ’s read about this study from Porto in Portugal dated March, 2015, which states that marinating meat cuts down carcinogens. Normally, with barbecuing carcinogens form on the surface of the meat, called heterocyclic amines. Marinating meat in beer for 4 hours prior to doing BBQ-ing will cut down the amount of the carcinogen. The investigators used different beers: regular Pilsner beer, non-alcoholic Pilsner and black beer ale. All three marinating methods reduced the formation of heterocyclic amines to a certain degree, only black beer was able to suppress the carcinogen formation by 90%. The BBQ method was by charcoal grill and the grilling process of pork was only stopped when the meat was well done. The heterocyclic amines were analyzed in the lab and compared to non-marinated otherwise identical meat. The same authors had done previous research, which showed that other harmful chemicals, polycyclic aromatic hydrocarbons were also inhibited by the same method of marinating. These chemicals have been shown to cause DNA damage and induce colon, breast, prostate and lymph system tumors.

A slight beer taste remains after marinating and BBQ-ing.

Generally speaking the higher the temperature when you cook meat the more carcinogens are produced.

Dr. Nalini Chilkov suggests various methods of reducing heterocyclic amines and polycyclic aromatic hydrocarbons. Why not use the slow cooker, like the crock pot to cook these meats slowly: beef, lamb, pork, poultry (such as chicken and turkey), fish and shellfish. It brings out the taste more and makes the meat really soft. 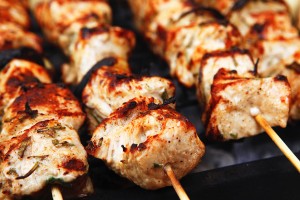 Here is a recipe for Mediterranean food: the only marinade you’ll ever need.

It appears that you do not need to marinade with beer, if you do not like the taste. Use garlic, lemon juice and olive oil instead and you have similar protection and an outstanding flavour. Other favourites can be marinades based on olive oil and soy sauce, citrus juice or pineapple juice. You can get creative and enjoy the results!