Lycopene is found in watermelon or tomatoes and has been associated with prevention of colon cancer. Now a study in Cancer showed that lycopene also helps to suppress the development of kidney cancer (renal cell carcinoma). Cathryn Bock, PhD. MPM and associates took the data from the Women’s Health Initiative with 96,196 postmenopausal women where food questionnaires were completed initially between 1993 and 1998 and then followed up until July 2013. 240 women came down with renal cell carcinoma during the follow-up. When lycopene intake was among the 25% top of the subjects 39% less kidney cancer was observed compared to the control group of subjects with the lowest 25% of lycopene intake.

Lycopene belongs into the group of carotenoids, the pigment that gives red fruit and vegetables their color. It has antioxidant effects and neutralizes free radicals.

It has been shown that lycopenes are preventing other cancers as well, such as cancer of the pancreas, colon and rectal cancer, cancer of the esophagus, oral cavity cancers, breast cancer and cancer of the cervix. The best source of lycopene are tomatoes and tomato products.

What is the mechanism of lycopene? It appears that protein oxidation is inhibited by lycopene and DNA damage from reactive oxygen species and reactive nitrogen oxide species is prevented. Healthy DNA is associated with healthy cells.

Lycopene is also good for the prevention of heart disease and diabetes. In addition it has been found that in patients with hepatitis C the transition from chronic hepatitis to liver cirrhosis and liver cancer is inhibited by lycopene. 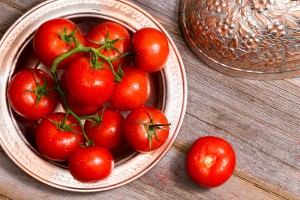 Lycopene is a natural pigment that has a multitude of beneficial effects. On the one hand it has cancer protective effects by preventing DNA damage, on the other hand it protects the blood vessels from premature aging and atheroma formation. Undoubtedly we will hear more about this important group of natural healing substances. For starters: enjoy your tomatoes and the color they throw into your foods. Read more about the health benefits at a later date.