Researchers from Ireland have completed a study where they found that low-dose aspirin reduces heart failure deaths. 892 patients with heart failure were prescribed aspirin, where 828 were low dose, the rest either high dose or none. The observation time was up to 12 years with a median of 2.6 years.

Patients on low-dose aspirin (75 mg per day) were 42% less likely to die and 30% less likely to be hospitalized for heart failure when compared to those who did not take aspirin. The group on high dose aspirin (162mg to 335 mg) had the same risk of dying as the control group without aspirin. 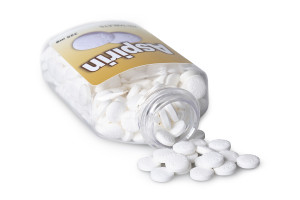 The lead author, Margaret Bermingham and colleagues stated that based on recent medical literature where high dose aspirin was compared to warfarin and mortality had been much higher than the warfarin group, conclusions were drawn that aspirin would not be safe and ineffective. Most of those trials had been done in the US and with high doses of aspirin. However, in Europe, where aspirin had been used at much lower doses the survival data were similar to the above findings. Dr. Bermingham went on to say that her current findings would “challenge the belief that aspirin should be avoided in secondary prevention patients who go on to develop heart failure”. She also added that those who presently take the higher aspirin dosage would benefit more from a dose reduction to 75 mg of aspirin per day as anti platelet medication.